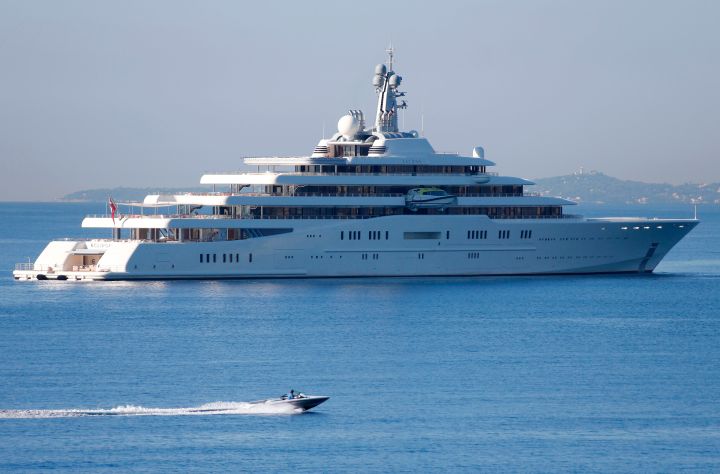 COPY
The Eclipse, one of the yachts of Russian billionaire Roman Abramovitch, pictured in 2013, is reportedly worth $570 million. Valery Hache/AFP via Getty Images

The Eclipse, one of the yachts of Russian billionaire Roman Abramovitch, pictured in 2013, is reportedly worth $570 million. Valery Hache/AFP via Getty Images
Listen Now

The West has been quick to impose sanctions on Russian oligarchs, freezing overseas bank accounts and seizing yachts and luxury real estate. The U.K. yesterday expanded its list of sanctioned elites to include former Chelsea Football Club owner Roman Abramovich. Some of Russia’s upper echelon have, in turn, urged Russian President Vladimir Putin to end his invasion of Ukraine. Yet critics have questioned the sanctions’ efficacy and their bearing on the course of the war.

Dartmouth sociologist Brooke Harrington argues in a new piece for The Atlantic that the sanctions represent an existential threat to Russia’s elite — and, by proxy, to the Kremlin itself.

“The sanctions both take away their ability to maintain their social status among their peer group of jet-setters, but [they] also mark them with a kind of stigma. And those things together create a sort of social death for them,” said Harrington in an interview with Marketplace’s David Brancaccio.

David Brancaccio: Oligarchs are not just rich people. We have those; Warren Buffett, Bill Gates — but Gates and [Elon] Musk and Buffett don’t have special ties to the Kremlin, which is part of the definition here.

Brooke Harrington: There are oligarchs all over the world, and the difference between a billionaire and an oligarch is that oligarchs don’t just have the money, they have the political clout and influence to change the way their government does business, or to represent their government’s interests abroad, sort of like informal ambassadors.

Brancaccio: As a sociologist, you look at these sanctions being applied to Russia and Russians and oligarchs, and it’s your sense that these will be especially hard for those targeted to swallow?

Harrington: Well, you can judge by what they started doing as soon as the sanctions were even announced. They were already on television, really angry about being denied access to their Italian villas. And then you had the really astonishing spectacle of household-name oligarchs like Oleg Deripaska pleading, publicly, with Putin to end the invasion. Obviously, they haven’t ended the invasion, but just the fact that they felt the need to do that is unprecedented, as far as I know.

Brancaccio: They’re not going to starve, though, under these sanctions. What do you think makes it so hard for them to process this particular set of sanctions?

Harrington: Part of the payment that you get as an oligarch — especially if you’re advancing the interests of Vladimir Putin in the Western democracies — is that you get to be a big player in the international status competition among the jet set of the world. And if sanctions take away your toys — your yachts, your access to your villas, your private planes — you’re not just losing the money that those things are worth; you’re being cut off from the primary fun of being an oligarch, which is to flaunt it all and to hobnob with the other rich and famous. These oligarchs from Russia are stigmatized now because they are Russian oligarchs, and that is going to hit them hard. The other thing is that what the Panama Papers showed is that many of these oligarchs are holding assets that really belong personally to Vladimir Putin. But Putin himself is smart enough to know that he shouldn’t be holding billions of dollars or expensive real estate in his own name, because then he can be punished by having those things seized. So he kind of puts them in different accounts offshore, in the names of his closest circle of oligarchs. But those assets really don’t belong to the oligarchs, they’re Putin’s. And the sanctions take away Putin’s wealth through that means.

Brancaccio: For people who don’t remember, the Panama Papers was a big data dump from a Panama-based law firm that was helping lots of people hide money — often illegally, but not always — all around the world. Now, you use this phrase, “social death” — that when the oligarchs’ reputation has been impacted by their inability, now, to flaunt their wealth, that really has a cost to them.

Harrington: It does. And that’s a term that goes back to a famous sociologist who was writing in the early 1950s, Erving Goffman. He described what happens to people who have been publicly humiliated or otherwise stigmatized, and that deep shame and embarrassment that means that you can’t show your face in public and even your friends don’t want to be seen with you — he describes that as social death. This similar phenomenon can be observed among almost everyone, including oligarchs. You would think that someone who is a billionaire wouldn’t give a darn what other people thought of them, but in my 15 years of researching offshore, one of the most surprising things I found was that, if anything, the richer you are, the more thin-skinned you can afford to be. Many of us who aren’t rich, if we’re insulted or if we lose face somehow in our social circles, we just have to suck it up and deal. But if you’re an oligarch, you can sue people for libel, or you can hire a full-time staff to keep your name out of negative stories. But this is out of their control, even as oligarchs. And the sanctions both take away their ability to maintain their social status among their peer group of jet-setters, but it also marks them with a kind of stigma. And those things together create a sort of social death for them, relative to their jet-setting status group.

Brancaccio: There’s reporting that, for instance, the United Arab Emirates is staying open and welcoming for Russian tycoons. So maybe they’ll switch their base of operations and it doesn’t really matter if it’s a fancy home in London or a fancy home in Dubai — or is it different?

Harrington: It does matter. Because just as among, say, middle school students, a pair of sneakers is not just a pair of sneakers, offshore holdings for oligarchs are not just offshore holdings. They don’t just put them anywhere. And oligarchs from particular countries have particular ways of using offshore to compete with one another. There’s a reason that London is colloquially known as “Londongrad” — because all the cool kids among the Russian oligarchs have to have their houses in Mayfair and Belgravia. So just going to the UAE may solve a legal and economic problem, but it doesn’t solve the social problem. And that’s something that’s really important to them.

Brancaccio: We see havens like Monaco and Switzerland are going to cooperate on these sanctions. And that’s interesting, given the work you’ve done on your book. They snapped to attention.

Harrington: When I first saw that news about Monaco, my jaw was on the floor, because they’re alienating some of their most lucrative customers. [For] the U.S. and the U.K., nothing too terrible is going to happen if Russian oligarchs stop having their money in those jurisdictions, but Monaco is a very small place; they need those lucrative Russian clients. So it’s really an extraordinary move. And it’s important, I think, because in the past, sanctions have been applied by individual countries against individual oligarchs. But as long as the other attractive tax havens weren’t sanctioning them, they could still status compete and do OK. That’s what’s new here, the united front. So that, I think, is going to really make these sanctions bite in a way that previous ones have not.