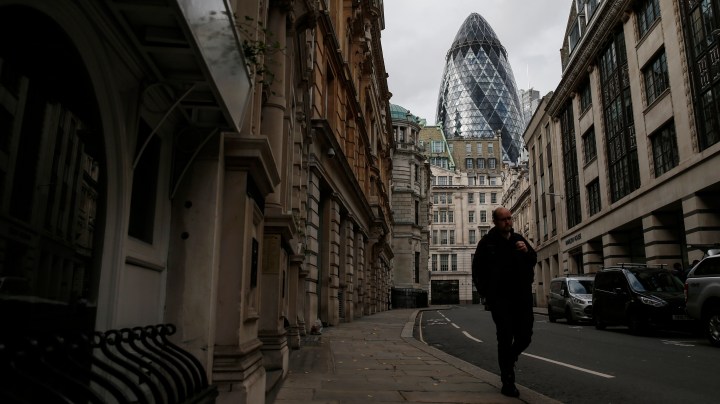 COPY
By one estimate, at least 150 luxury properties in the U.K. — $2 billion worth — are owned by Russians with links to the Kremlin. Hollie Adams/Getty Images

By one estimate, at least 150 luxury properties in the U.K. — $2 billion worth — are owned by Russians with links to the Kremlin. Hollie Adams/Getty Images
Listen Now

The British government, stepping up the pressure on Russian President Vladimir Putin, is prepared to impose a package of economic sanctions on Kremlin-linked individuals and businesses if Russia invades Ukraine.

In theory, the United Kingdom is well placed to carry out that threat. So many of Putin’s closest oligarch friends are believed to hold a substantial chunk of their wealth in the U.K., especially in the form of multi-million dollar real estate, that the British capital has been called “Londongrad.”

Some critics of the Russian president say that sanctioning such investment is the best way to deter an invasion.

“It’s pretty clear to me that the thing Putin values most is his money,” said Bill Browder, who was once the largest foreign investor in Russia and has waged a long campaign against Russian corruption.

“Putin has been a kleptocrat for the last two decades. In that time, he’s stolen a vast amount of money from the Russian state and various people in Russia,” Browder said. “He can’t keep that money in his own name. He has to have people who he trusts hold that money. I call these people ‘oligarch trustees.’ The best way to deal with Putin over Ukraine is to go after that money.”

Putin has repeatedly denied allegations of corruption. But Browder has direct — and painful — experience of state-sponsored theft and other kinds of malfeasance in Russia. His company was hijacked by corrupt Russian officials and used to siphon off millions of dollars in tax payments into their own pockets.

His Russian lawyer, Sergei Magnitsky, uncovered the fraud, alerted the authorities and was arrested and imprisoned. Magnitsky died in 2009 after mistreatment in jail. Browder lobbied for the introduction of legislation (the Magnitsky Acts) in the U.S., the U.K. and many other countries, to sanction the Russian officials involved.

Browder says it’s time to freeze and seize the assets of Putin’s closest oligarchs in order to force the Russian president to back off from Ukraine.

“He values money more than human life. It’s central to his whole being. It’s his Achilles’ heel,” he said.

The U.K. is the ideal place to take such action, according to anti-corruption activists. Roman Borisovich, a Russian former investment banker who now campaigns against money laundering, regards the London real estate market as a playground for kleptocrats from around the world — especially from Russia.

Before the pandemic, Borisovich organized a series of “Kleptocracy Tours,” in which he took journalists on sightseeing trips through some of London’s most exclusive neighborhoods. One of the tours was devoted to Russian-owned property.

“We showcased mansions, apartments, palaces attributed to Russian kleptocrats. It’s the very, very top of the iceberg” he said.

The anti-corruption group Transparency International UK says there are at least 150 luxury properties in the U.K. — $2 billion worth — owned by Russians with links to the Kremlin. And there could be many more.

That’s a deeply shaming fact for Britain, said Borisovich. He not only deplores the kleptocrats but their British enablers, too.

“They have been aided by an army — an army of accountants, brokers, bankers, lawyers. These people are enabling this looting machine to exist,” he said.

The British government insisted that Russia’s maneuvers on its border with Ukraine changed everything. Foreign Secretary Liz Truss said the government was committed to taking aim at some of these oligarch-owned properties in the U.K. Introducing tough new powers to freeze the U.K. assets of anyone with links to the Russian state, she said:

“Those in and around the Kremlin will have nowhere to hide. We will make sure that those who share responsibility for the Kremlin’s aggressive and destabilizing action will share in bearing a heavy cost.”

But her statement was interrupted by laughter from some legislators who are profoundly skeptical about a British crackdown on Russian assets. For one thing, the full extent of Russian ownership of British real estate is unknown, according to Duncan Hames of Transparency International UK. That’s because there’s a massive loophole in the regulations against money laundering: Any foreign individual buying property in the U.K. can always hide their true identity behind an offshore company.

“Until we get the reforms we’ve been calling for to reveal who’s really behind the companies that own property here, the government would be acting with one arm tied behind its back,” Hames said, adding that more than 85,000 properties in the U.K. are owned anonymously by entities registered abroad.

“It is frankly astonishing that people can buy up bits of Britain and Britain doesn’t get to know who they are,” he said.

The British government has promised to close this loophole and establish an open register of beneficial ownership in legislation later this year.

Roman Borisovich has his doubts. After all, he said, the U.K. did not crack down on oligarch assets even after a 2018 nerve agent attack by Russians in the English city of Salisbury.

“I don’t think that Russian aggression in Ukraine is any better reason to use these powers than the killing of a British citizen on British soil with nerve agent,” he said. “They will not touch the oligarchs in London.”

Embarrassingly for the U.K. government, the country’s closest ally may share that skepticism. The Times newspaper quoted an American diplomat expressing the fear that “Russian money is so entrenched in London now, the opportunity to use it as leverage against Putin may have been lost.”