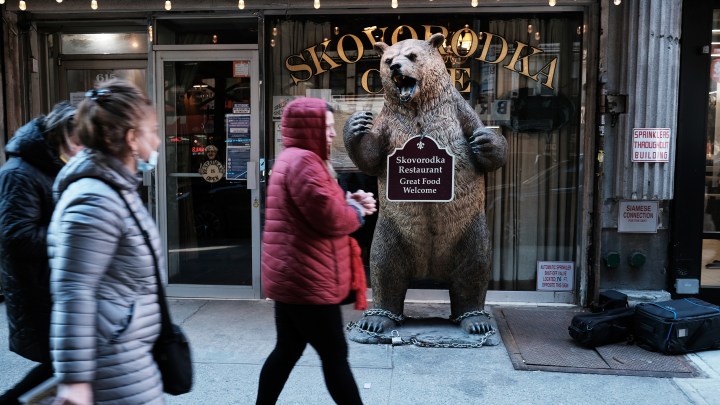 When I asked Michael Von Shats what time I should stop by his restaurant for an interview, he told me any time was fine; he didn’t expect to be very busy. He was right. When I arrived at Russian Samovar in Manhattan’s Theater District during the usually buzzing post-work, pre-Broadway show hour, just a few people sipped cocktails at the bar.

“Business dipped pretty much overnight,” he said. “On Friday, we had 20 cancellations — bar was empty. Saturday, same — empty, dead, desolate.”

Russian Samovar is the kind of place where you come for the borscht and stay for the party. It’s known for its infused vodkas and live music. These days, no one is in a celebratory mood — not Ukrainians, Russians or tourists.

“Because there’s Russian in the name, they think they’re supporting an evil, when we’re not,” Von Shats said. “We opened up this place as a haven for those that defected and those that were kicked out.”

The restaurant opened in 1986, before the collapse of the Soviet Union. Von Shats’ grandfather started it with two famous Soviet immigrants: Joseph Brodsky, the exiled Nobel-winning poet, and Mikhail Baryshnikov, a renowned ballet dancer who defected.

Von Shats was born in California. His mother is Russian, his father’s Ukrainian and much of his staff is Ukrainian, too. He’s worried people gloss over all that.

“I typed in Russian Samovar,” said Von Shats, pulling up Google on his phone, “and then you go down and you start seeing this.”

The associated photos were pictures of war-torn Ukraine. “Then, you go into the reviews,” he continued. “Seven hours ago: ‘Stop the war. War is not the answer.’ We have nothing to do with this.”

The reviews have since been taken down. But, to put it bluntly, Russian Samovar has a bit of a PR problem.

“People have asked me to take the name Russian off of Samovar. And I said we’ve done this for 35 years, we’re not going to take the word ‘Russian’ off,” he said.

Other business owners are grappling with the same decision. In Austin, Texas, Varda Monamour renamed her restaurant. What was The Russian House is now The House.

“Because right now, the name itself brings people pain,” she said. “And if it just brings the relief to anyone in this world, it’s worth of doing it.”

This has been controversial. On the restaurant’s Facebook page, some are celebrating the change. Others worry it only solidifies the narrative that Russian-Americans support the Russian government. Monamour said she simply wants to make it clear that her restaurant is a safe space for all Eastern Europeans.

“Our diners have been able to distinguish between the actions of the Russian government and the Russian culture and people,” said owner Anya El-Wattar. “But there’s definitely a lot of questions.”

They ask questions about the war, about the restaurant’s stance and whether it will stop serving Russian imports. The answer is yes, El-Wattar has stopped serving Russian vodka and caviar because of her objection to the war, and sourcing similar, high-quality caviar has been tough. She said she welcomes customers’ curiosity about what’s happening in Ukraine, and about the history and culture that post-Soviet states share.

“That is the whole spirit behind this restaurant. To create this space for people to come together and talk about shared human values,” she said.

Conversations that are perhaps a little easier when paired with cabbage rolls.