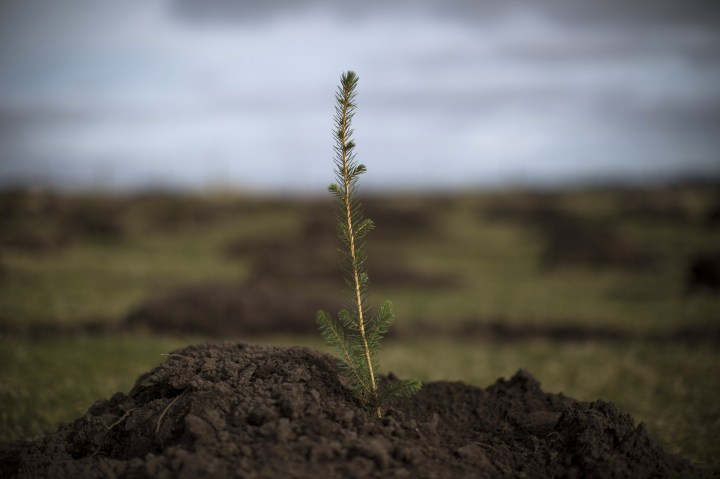 A Sitka spruce is planted at the North Doddington site in Doddington, England. Dan Kitwood/Getty Images

This story was updated on Feb. 22 at 2:05 p.m. EST to include a statement from Discover.

A lot of credit cards advertise that “for every __ dollars spent we will plant a tree.” How can these claims be verified? A simple hand calculation would indicate that, given the amount of purchases via credit cards, we should be planting billions of trees a year — which is not happening. What gives?

With a swipe of a card, you can help combat climate change.

That’s according to a host of credit card lines now touting tree-planting efforts. One Mastercard program, pledging to plant one tree for every $2 donated, aims to restore 100 million trees by 2025. Mastercard’s wooden TreeCard charges merchants a small fee. “We take these fees and use them to plant trees on your behalf,” it says.

Customers of the European bank Bunq are told that a tree will be planted for every €100 spent using its Easy Green plan, “launched to help make the world a greener place without any effort.”

Meanwhile, a cashback bonus option offered by Discover gives the customers the option to donate $1, which will plant one tree. And the fintech company Aspiration, which says it is “100% committed to clean money,” launched debit and credit cards that give consumers the option to round up their purchase to the nearest whole dollar, the proceeds going to tree planting.

These goals aren’t limited to credit card companies — corporations like Amazon and Unilever have also partnered with initiatives to plant trees.

Rainald Lohner is on to something: As we’ve previously reported, some environmental groups say there isn’t enough land and forest for all corporations to hit their ambitious tree-planting goals. One expert put it bluntly: “We’d need another planet.”

Are these tree-planting goals possible?

If you ask Mastercard, the answer is yes.

In a statement provided to Marketplace, the company said its Priceless Planet Coalition had “a clear tree-planting goal” it was “on track to meet”

“… success isn’t solely measured in terms of seedlings planted,” the statement continued, “and this is what sets the Priceless Planet Coalition apart. We are also focused on how much forest and biodiversity is thriving five years out and the restoration benefits the people who reside in and around these landscapes.”

When asked how many trees they’ve planted thus far, a Mastercard spokesperson said, “we intend to provide regular updates on an annual basis and at key milestones throughout the year.”

“Trees are typically planted around three months after receiving donations. Cardmember donations are sent to Carbonfund [a nonprofit partner] once a month, so donations received in December are likely going toward trees that will be planted in the next month or so,” the spokesperson said.

ProPublica published an investigation into Aspiration’s targets last year, reporting that Aspiration initially said it had planted more than 35 million trees but later said the number was 12 million. “If you believe the company’s projections, Aspiration has a very green future (in both the environmental and profit sense). But the fine print in the company’s materials suggests it has a long way to go to get there,” reads the report.

In response, Aspiration said ProPublica “missed the mark.” The company said it had paid for the eventual planting of 35 million trees and that 16 million trees had in fact been planted by the time the investigation was published last November.

Planting a tree for $1 is easy for a corporation to agree to because any program lasts only as long as it’s feasible for tree suppliers, said Patrick Callery, an assistant professor of management at the University of Vermont.

“Tree planting is a way that companies can, probably, make their claims about addressing climate change in a way that’s more salient for consumers — that they feel can drive consumers to action,” Callery said.

Credit card companies, specifically, have committed to tree-planting initiatives because they want you to spend more money so that they can collect more interest, Callery added. “It’s a way to encourage additional consumption,” he said.

Holly Jean Buck, an assistant professor of environment and sustainability at the University of Buffalo, said she believes “the impulse is to make the promise first, and then figure out how to deliver on it later.”

“Unfortunately, our governments are pretty much doing the same thing. So I don’t think it’s unique to these companies,” Buck added.

In a recent academic review of tree-planting initiatives, researchers point out that entities with eco-marketing projects collaborated with nonprofits or non-governmental organizations and most “were not actively involved in restoration efforts on the ground.”

So what would be effective?

The cost cited to plant these trees is also often unrealistic and short-sighted, according to experts.

“If you’re going to have that tree survive and grow until it becomes a big tree, you have to maintain the tree,” said Karen Holl, an environmental studies professor at the University of California, Santa Cruz. “You have to make sure that the landowner protects the tree and that they’re getting some income from the land. And that’s a lot more than a dollar a tree.”

Holl, with restoration ecologist Pedro Brancalion, wrote a piece for nonprofit media network The Conversation about why we should focus more on “tree-growing” instead of “tree-planting” and how tree-growing campaigns can succeed.

“Most tree-planting efforts focus on digging a hole and putting a seedling in the ground, but the work doesn’t stop there,” the two wrote. “To achieve benefits from tree-planting, the trees need to grow for a decade or more.”

Guidelines that they and other experts propose include: protecting existing forests, involving local communities in tree-growing initiatives and planning longer-term goals.