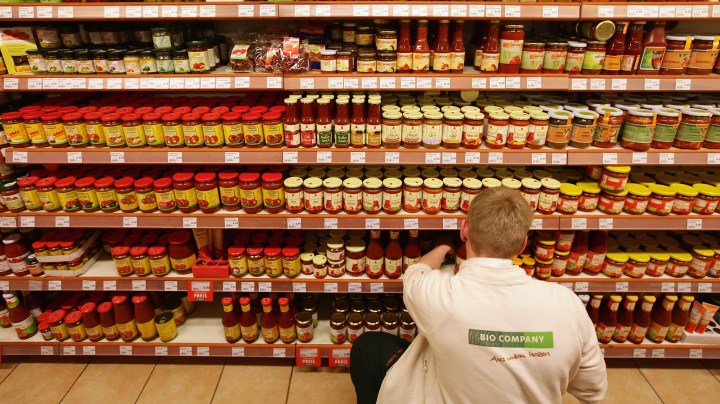 COPY
Companies big and small are struggling with how best to battle inflation — whether that means passing it on to customers or absorbing the costs. Sean Gallup/Getty Images

Companies big and small are struggling with how best to battle inflation — whether that means passing it on to customers or absorbing the costs. Sean Gallup/Getty Images
Listen Now

As the Federal Reserve decides when to hike internet rates and how many times, it’ll be keeping an eye on inflation. If prices keep rising, the central bank is likely to keep raising rates.

Over the last few weeks, we’ve been hearing from companies that plan to raise prices this year, including Starbucks, Procter & Gamble and Levi’s. Some smaller businesses are planning price hikes as well.

When weddings, parties and in-person work started coming back last year, menswear supplier David Donahue went from having warehouses full of items to not having enough.

“Shortages of something as simple as a black bow tie to wear with a tuxedo,” said Rob Donohue, president of David Donahue. “Or a tuxedo. Or the shirt.”

To make matters worse, shipping costs are skyrocketing. This month, for example, Donohue said he spent $27,000 to ship one container of merchandise.

Donohue’s raw materials are getting more expensive, too. So last October, the company decided to hike prices by 7%, on average. Now he’s worried that might not be enough.

“Six weeks after we made that decision, the price of the main raw material — U.S. Supima cotton — spiked by another 50% to 60%,” Donohue said.

But for now, Donohue’s hands are tied. Given the seasonal market for clothes, he has to set his prices months in advance.

“On the main component, the main driver of our business, men’s shirts, we are not able to take that price increase until July,” he said.

A lot of suppliers are planning price hikes later this year. Natasha Amott, the owner of Whisk, a kitchenware store in New York, said her suppliers have typically raised prices once every few years. Now companies that raised their prices last summer are emailing her again.

“Going into 2022, we’re getting those same suppliers saying, ‘So sorry, we have to do another round of price increases,’” Amott said.

Then, there are those skyrocketing shipping costs. Amott said for the first time, freight surcharges started showing up last summer. Suppliers were hoping that the surcharges would only last about six months.

“We’re now, in many cases, about six months into those temporary surcharges, and they’re still here,” Amott said.

Amott is raising prices at Whisk to help cover the higher cost of goods, but she’s not passing on those freight charges to her customers — in large part, because of how often they fluctuate.

“To really build in the freight charges, it would be just a lot of number crunching on a daily basis, and frankly we just don’t have time for that,” Amott said.

Those fluctuating costs are making it more difficult for business owners to figure out their profit margins.

Jovani Prince is founder and CEO of The Cracker King, a company that makes gluten-free crackers. He said the prices of his ingredients — including sorghum, tapioca flour and potato starch — are all rising.

“To really have a steady price point, so you can really know your profit margin, is not easy,” he said. “It’s fluctuating from each order, to order, to order.”

But Prince can control the cost of production. So last November, he moved his operation from a shared kitchen in Portland, Oregon, to a commercial facility in Texas.

“They’re able to do a lot more numbers in a lot shorter [period] of time,” he said. “Like with anything, the more numbers and the faster it goes, the lower the price is.”

Prince said those lower costs gave him the wiggle room to avoid having to raise prices this year.

“When you start doing that, then you price yourself out of the market,” he said. “I think that’s one of the last resorts that you go to at a certain point.”

Even without raising prices, The Cracker King will turn a profit for the first time since Prince founded the company five years ago.