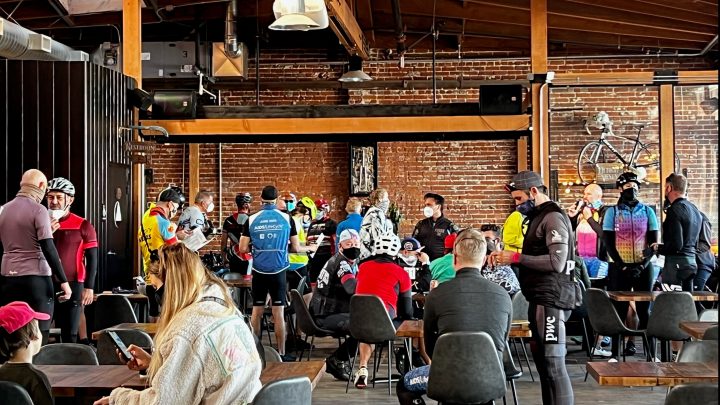 The pandemic has affected businesses across diverse industries. The economic turmoil has led to large and small businesses filing for bankruptcy, shutting down, laying off employees or struggling with high quit rates.

At the same time, entrepreneurship has surged during the pandemic. A record 5.4 million Americans filed applications to start new businesses in 2021, the Census Bureau reported recently.

Erin Detroit Vesey is one of those entrepreneurs. Vesey is the owner and chef at Detroit Vesey’s, a queer-centered cycling cafe in the Los Angeles Arts District that offers Midwestern comfort food.

“Detroit Vesey was inspired to recreate the community that they experienced on AIDS Lifecycle, a 545-mile bike ride from San Francisco to LA that raises funds to fight HIV/AIDS and the stigma,” the website reads.

The restaurant opened its doors in November, but Vesey has been thinking about it for a long time.

“I made a Facebook post that I make yearly of, ‘Hey, this is a cool building, who wants to help me open up a restaurant?’ And for whatever reason, this last post kind of clicked with people a lot more,” Vesey said.

Vesey’s good friend reached out, offering to be a business partner and make the idea into something tangible that caters to the bicycling community.

“A lot of the cycling spaces on this side of town don’t have indoor bike parking,” Vesey said. “So we have a bike vending machine indoors, so people can buy equipment and stuff without having to wait in line while people are ordering food.”

The young business has already faced some challenges.

“COVID has definitely impacted the business, I think it’s more so starting in the holidays … and then add a COVID spike on top of that, and making it hard for people to leave their homes and go out and discover new things.”

There was also trouble navigating some of the city’s rules on starting a business.

“Dealing with, like, permitting, and the city, and all of that, and kind of navigating those things — I have less experience in that area, so it was definitely a huge learning curve,” Vesey said.

“I think the thing that I’m most excited about is that I get to offer community to people and a space to just kind of feel safe and accepted regardless of whether or not you’re queer or on a bike or any of those things,” Vesey said. “It’s really just a space that people can come and have comfort instead of trying to kind of do performing around whatever part of the community they’re in.”