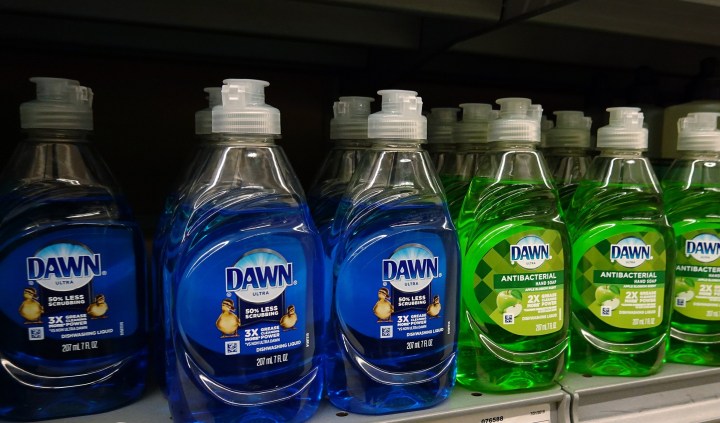 Dawn dish liquid is made by Procter & Gamble, which has been raising prices and posting higher sales. The company plans to increase prices further later this year. Joe Raedle/Getty Images
I've Always Wondered ...

Dawn dish liquid is made by Procter & Gamble, which has been raising prices and posting higher sales. The company plans to increase prices further later this year. Joe Raedle/Getty Images

I’m trying to understand how or maybe why companies are beating earnings [forecasts] and in some cases have record [profit] growth during a time of increased expenses (shipping containers for example). I understand most companies are passing along their increased cost to the consumer, but if a company blames that their costs have increased, so the prices of their goods/services need to increase to cover the cost, then how can they in turn have record [profits]?

By now, you’ve probably noticed higher price tags on many groceries and consumer goods. In December, the U.S. consumer price index rose by 7% year over year — the highest rate since 1982.

In response to rising inflation and supply chain issues, some companies have passed along their higher costs to consumers.

The conglomerate Procter & Gamble — which sells common household items like Tide detergent and Dawn dishwashing liquid — reported that sales grew 6% in its most recent quarter, even though it raised prices by 3% on average during the period. In the previous quarter, P&G sales rose 5% and prices rose 1%. And prices for some of the company’s products will inch higher later in the year.

The company beat earnings estimates at $1.66 per share versus an expected $1.65.

Some economists and politicians have raised concerns about the prices of consumer goods, pointing out that although some companies cite inflation or supply chain issues as their rationale for increases, they’re not just breaking even —  they’re raking in high profits.

In an op-ed for The Guardian, former U.S. Labor Secretary Robert Reich wrote, “Corporations are using the excuse of inflation to raise prices and make fatter profits.” (Emphasis his.) He said some companies, like P&G, lack competition and thus have the market power to do this.

U.S. Sen. Elizabeth Warren wrote letters to the CEOs of major grocery chains, which include Kroger, Albertsons and Publix, asking what steps they’ve taken to “protect consumers.” The Democrat from Massachusetts pointed out that Kroger reported $2.6 billion in profits in 2020, an increase of 5.6% over 2019, while Publix enjoyed 60% profit growth for the third quarter of 2020. Albertsons’ net income jumped from $612.1 million to $1.89 billion between 2019 and 2020.

In response to concerns like those Warren raised, a Kroger spokesperson said over email that the company “continues to operate in a volatile inflationary environment.”

“Kroger and other grocery retailers have seen higher product cost inflation in most categories. We are being disciplined in managing these increases and our teams are working to minimize the effect on our customers,” the spokesperson said.

Over email, P&G said that the company is taking some measures to try to offset “substantial year-over-year increases of commodity and transportation costs.”

“First, we’re working hard to find cost savings within other areas of our business,” P&G said. “And, where we need to pass on some costs, we’re pairing those price increases with innovation wherever possible to continue to deliver great value for our consumers.”

Albertsons and Publix did not respond to requests for comment by publication time.

How these companies have been able to succeed

Linda Montag, senior vice president at Moody’s, told Marketplace’s Justin Ho that companies like P&G sell essential household items people need to clean their homes and take care of their families, which means they can hike prices with little pushback in response. Montag also noted that consumers have stayed loyal to name brands, which has helped companies like P&G.

Shivaram Rajgopal, an accounting and auditing professor at Columbia Business School, agreed that many companies posting high profits, like some groceries, can do so because they have pricing power.

“You’re able to not only pass the inflated food costs on to the customer, you’re also maybe adding a tiny premium to that,” Rajgopal. “That goes into your profits line.”

Rajgopal added companies that sell items like eggs and tomatoes have an easier time passing on costs, perhaps with a premium. These are relatively inelastic products, he said, whose demand won’t change with a bump in price.

Vivek Singh, a finance professor at the University of Michigan-Dearborn, said over email one could debate whether companies have the ability to “absorb higher costs at the expense of lower profits,” but this is not what investors expect.

“The [stock] market expects higher profits from these dominant firms, and any less would depress their share prices,” Singh wrote.

William Lazonick, professor emeritus of economics at the University of Massachusetts, Lowell, said the companies raising prices are large enterprises that should know how to solve their supply chain issues — and one way to do that is invest in people and pay them equitable wages.

“They’ve become so focused on just getting their stock prices up,” Lazonick said.

Experts did caution, however, that growth rates can be misleading and each company is different.

Mark Bradshaw, an accounting professor at Boston College, said year-over-year percentage changes in profits and other metrics may have reached record levels for many firms because of the economy’s poor performance during the first year of the pandemic. When it comes to earnings forecasts, he noted that companies “typically will try to walk analysts’ expectations down so that they can beat expectations.”

And Scott Yonker, an associate professor of finance at Cornell University, said some firms’ nominal profits may have gone up due to inflation, but their real, or inflation-adjusted, profits might have stayed the same.