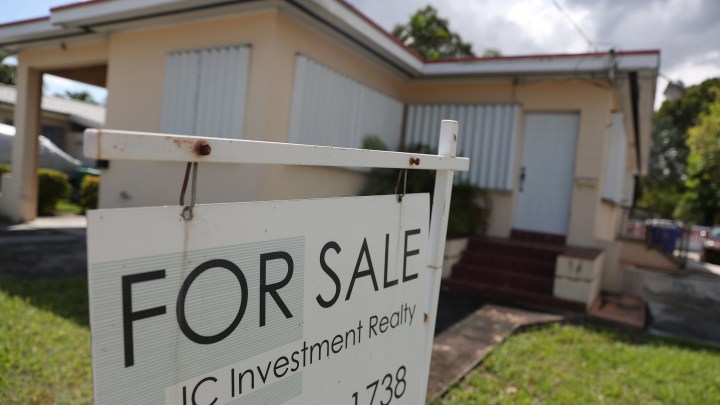 Homebuyers and owners who refinance have benefited for the past 18 months from record low rates for a 30-year mortgage. But that’s changed recently: Mortgage rates are back up, hovering around where they were back in spring of 2020.

If the Federal Reserve raises interest rates soon — as it has signaled it will — that could eventually drive mortgage rates up, too. Buyers are getting that signal. Even as rates rise, mortgage applications are up.

Back in September, Dustin and Erica Goldman found a home they liked in Brooklyn with enough room for their home office and toddler. So they put in an offer. But it took forever to close and their low mortgage rate was at risk of expiring.

“The day that we got word that they had extended it, it was the day that the Fed met and said they’re gonna definitely increase rates in the new year. Like, ‘Oh, phew!'” Dustin Goldman said.

His wife Erica said they moved into their three-bedroom unit on Friday, after closing just four days earlier. “And we’re just in love with it. And there’s so much unpacking to do!” she said.

Sometimes when interest rates tick up, buyers back off, hoping rates will fall again and they’ll get a better deal. But some brokers say it’s a different story right now.

“Recently the rates, they have been steadily going up for the past 12 days, if you look at it,” said Tiffany Bogerty, a mortgage broker in Florida. She said some buyers are telling her they want to cinch down loans now before rates rise further.

David Waller needed to find a house quickly after moving his family of five to Mandeville, Louisiana.

“We wanted to get it closed as quickly as possible,” Waller said. That’ll happen at the end of the month. “We were thinking that rates could start going back up.”

For existing homeowners who want to refinance their mortgages, it’s a different calculation right now.

“The rate hike has affected a lot of deals because it was so extreme,” said Eric Bergeron, a loan officer in California who has a lot of clients who want to refinance a 30-year loan. “I’m giving them a quote, you know, six weeks ago at 2.7. Now, they’re ready to move forward but, you know, now it’s 3.3!”

They might back out of the refinance, Bergeron said. For those clients who already have a home, the stakes are lower than for those trying to buy one for the first time.