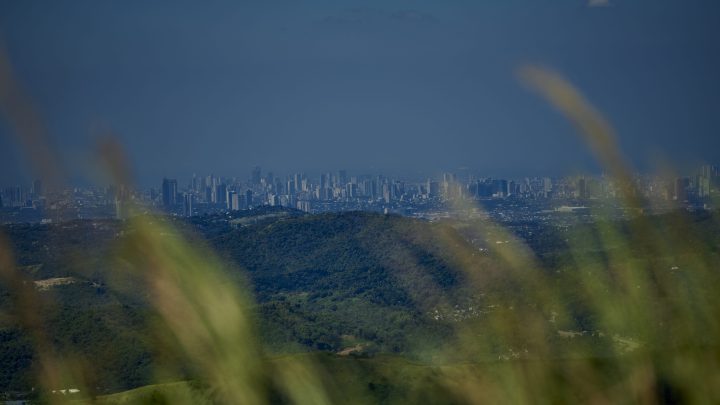 COPY
Parts of the Philippines have struggled to find the balance between preserving natural ecosystems and investing in man-made alternatives. Jes Aznar/ Getty Images
A Warmer World

Parts of the Philippines have struggled to find the balance between preserving natural ecosystems and investing in man-made alternatives. Jes Aznar/ Getty Images
Listen Now

The loss of natural areas and declining biodiversity are putting the economies of many cities around the globe at risk. That’s according to a new report from the World Economic Forum, the organization behind the annual meeting of world leaders in Davos, Switzerland.

According to the report, about 44% of GDP in cities around the world is at risk of environmental disruption by flooding, drought, intense heat and pollution. That’s some $31 trillion dollars.

Over hundreds of years, humans have paved over streams and wetlands and cut down forests to build cities. Todd Gartner, who directs the Cities4Forests initiative at the World Resources Institute, said cities are now feeling the impact of that.

“These issues are only going to get more intense in the years to come and we’ve got to change that trajectory if we want a thriving economy,” Gartner said.

Many cities around the world are trying to change that trajectory by investing more in “green infrastructure” or “nature-based solutions.”

“We used to just call it nature before it was largely decimated,” said Kate Orff, a professor at Columbia University and the founder of the landscape architecture firm SCAPE.

There are environmental and economic benefits to restoring wetlands and forests within cities and building more bike lanes and rain gardens, according to Antonia Gawel, the head of climate at the World Economic Forum.

“It doesn’t have to be a kind of trade-off between growing city infrastructure, and actually preserving nature and natural ecosystems. It’s not more expensive, it is actually better from an economic standpoint,” said Gawel.

In some cases, it’s even cheaper.

On average, Gawel said, nature-based solutions like the ones outlined cost cities about 50% less to build than man-made alternatives.