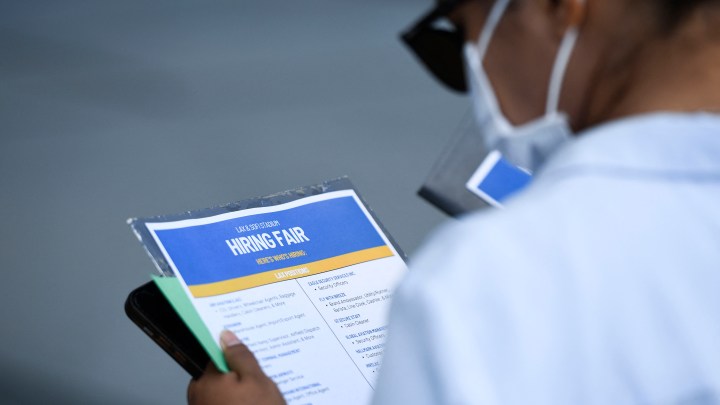 COPY
Though first-time unemployment claims are at their lowest point in about 50 years, omicron could disrupt the job market. Patrick T. Fallon via Getty Images
COVID & Unemployment

Though first-time unemployment claims are at their lowest point in about 50 years, omicron could disrupt the job market. Patrick T. Fallon via Getty Images
Listen Now

The labor market looks strong in the waning days of 2021. On Thursday morning, we learned that weekly unemployment claims are still hovering at the lowest level since 1969.

But can that be sustained in the new year with omicron coronavirus variant factoring in?

Economic news is often, by nature, repetitive. And today’s jobless numbers are similar to the ones that came out last week and the week before — but that’s good news.

“I think really the clear picture here is that omicron hasn’t caused massive layoffs — at least not yet,” said AnnElizabeth Konkel, an economist at the job site Indeed.

A couple of caveats: Data from the last week of the year can be cloudy. Companies are probably less likely to lay people off during the holidays.

Also, “if you were laid off you may have just said, ‘You know what? I’m going to deal with that in January, especially because there’s been so many stories over the last, like, 21 months of the pandemic about how clogged the unemployment system is,'” Konkel said.

So, states could be reporting an influx of applications by, say, mid-January.

Gary Burtless, a labor economist at the Brookings Institution, agrees that these are good numbers. But he also thinks omicron will affect the data going forward. Yes, a lot of people are getting mild symptoms, but that’s still disruptive to the workplace.

“Think about a restaurant that has seven or eight employees, three of whom are sick. It could cause some employers to just shut down, at least temporarily,” Burtless said.

Businesses are dealing with plenty of uncertainty because we’re still in this place where it’s not clear whether you’ll get sick, or how sick you’re going to get, if you are infected with COVID. It depends on who you are and, in part, whether you’re vaccinated and got the booster.