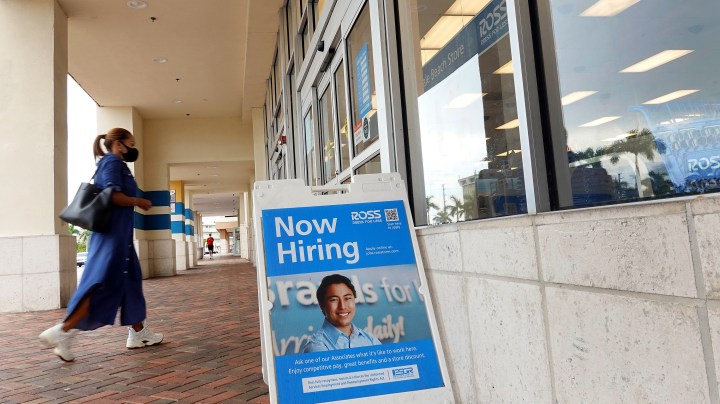 COPY
Job creation is likely to slow down a bit in the next year. Joe Raedle via Getty Images

Job creation is likely to slow down a bit in the next year. Joe Raedle via Getty Images
Listen Now

This Thursday was accompanied by an encouraging number: Just 184,000 first-time applicants for unemployment last week.

There haven’t been that few since “Honky Tonk Women” and “Sugar Sugar” were at the top of the charts (since 1969). Things are looking good for the maintain-full-employment half of the Federal Reserve’s dual mandate. We get news on the other half — stable prices — on Friday, with the Consumer Price Index and core inflation rate for November.

​We know the economy’s still coming out of the pandemic. And that things have changed, to say the least. So maybe the question we should be asking is: Where’s this economy going to be in December 2022?

“So if I’m wrong, it’s probably because we’re in a recession — either caused by a terrible resurgence of the virus, a financial market accident or something else,” he said.

We can’t know about any of that, but we do know that the labor market withstood COVID-19 variants pretty well in 2021. That’s because consumer demand has stayed strong, said analyst George Pearkes at Bespoke Investment Group.

“I think the baseline assumption should be we’re not going to see big hits to consumer demand from a new variant,” Pearkes said.

What’s more likely to happen over the course of 2022, he said, is that the blazing hot job market will cool down. “So we’ve seen, from month to month, roughly 400,000 jobs created every month. We can’t create that many new jobs next year,” Pearkes said.

Another question is how many of those are high-quality jobs, according to Kate Bahn at the Washington Center for Equitable Growth. “And that includes jobs with attributes like paid leave, paid sick [time], scheduling stability and adequate wages, of course,” she said.

Workers were able to quit jobs without those attributes in 2021. And that, she said, will need to continue for the economy to become more equal.