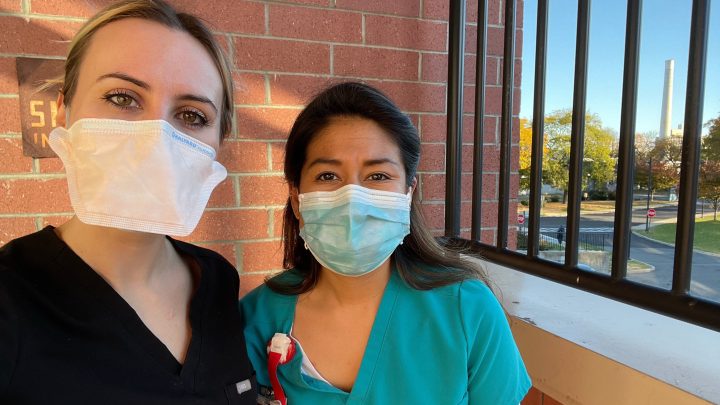 COPY
Nurses Klivia Brahja, left, and Kelley Cabrera work in the emergency room at Jacobi Medical Center in the Bronx, New York. Many veteran nurses, Cabrera said, have retired or "they’ve gone to something easier, because this is just unmanageable.” Courtesy Klivia Brahja
COVID-19

Nurses Klivia Brahja, left, and Kelley Cabrera work in the emergency room at Jacobi Medical Center in the Bronx, New York. Many veteran nurses, Cabrera said, have retired or "they’ve gone to something easier, because this is just unmanageable.” Courtesy Klivia Brahja
Listen Now

The problem of the so-called Great Resignation is especially acute in health care right now. In August, according to the Bureau of Labor Statistics’ Job Openings and Labor Turnover Summary report, or JOLTS, 534,000 health care workers quit their jobs, compared to 404,000 a year earlier.

The quits rate in health care stood at 3% (not seasonally adjusted) in August, the highest level since BLS began collecting the data in 2000.

And the number of people working in nursing and residential care facilities has fallen by 398,000 — nearly 8% — since February 2020, with negligible gains through the economic recovery. Hospital employment is down by a net 76,000 since the pandemic hit.

Two young nurses who have been through the age of COVID at a big public hospital in New York City demonstrate the challenges facing the workforce.

Kelley Cabrera is a registered nurse who works in the emergency room at Jacobi Medical Center in the Bronx, which operates a major Level I trauma center and is the biggest public hospital in the borough.

Cabrera, 29, came to Jacobi just out of nursing school in her early 20s. “When I started here, I was one of the youngest people in the ER, and I was working with nurses that have been doing this longer than I’ve been alive,” she said.

Now, even though the volume of COVID cases has subsided, patients who delayed other care during the pandemic are surging into the hospital. “Our ER is busier than it’s ever been before. We’re seeing so many more patients [and] our patients are sicker,” she said.

Meanwhile, Cabrera has seen numerous co-workers leave. “This week alone we lost two nurses in the ER,” she said, “almost 10 in the last two months.” She’s also saw an influx of temporary nurses and new hires coming in to cover. Sometimes she comes to work, she said, “and I don’t recognize people because so many people have left.”

That includes her friend and fellow ER nurse Klivia Brahja, who started at the hospital three years ago.

“Jacobi was my dream hospital when I graduated nursing school,” Brahja said. “My family grew up right around Jacobi, and it has a very large immigrant population — that’s kind of like what my family was when we were growing up.”

It was also Brahja’s dream job. She earned around $80,000 a year on a union contract, treating everything under the sun. But with the risk of COVID, all that didn’t seem so great anymore. “You know, it was right after the pandemic, it starts to get into your head: ‘OK, well if I’m going to go through all this, then maybe I should make more money.’”

Brajha moved to a big private hospital nearby. Her salary went up by $20,000.

Some nurses can take advantage of an even more lucrative option if they leave their jobs these days. They can become traveling nurses and plug staffing gaps around the country.

Cabrera said nurses she’s trained at Jacobi have left to make “$7,000 a week. One of the people I preceptored, he said, ‘What I make here in a year, I’m going to make in about four months doing a travel contract.’”

At the same time, a lot of veteran nurses are leaving and taking their institutional knowledge with them. “Those are the people you want teaching you,” Cabrera said. “A lot of those nurses have either retired or they’ve changed departments, they’ve gone to something easier, because this is just unmanageable.”

Meanwhile, Brajha found the transition to her new, higher-paying nursing job difficult to manage. She had to adjust to a new ER, new protocols and lots of turnover there as well. “So, I went there for two months, and I just realized that the challenges in nursing really don’t go away, even if you’re being paid more.”

Plus, she missed her old hospital. “It was the relationships that I had built, that I — I wanted to go back to the environment where I felt safe. I could go up to one of my residents and have a conversation: ‘Hey, why are we doing this versus this?’”

So, she’s back at Jacobi Medical Center. Her friend Cabrera is happy about that, even though she isn’t sure how much longer she can stick it out. “I’ve been a nurse for seven years,” Cabrera said. “And probably the last six months have been me thinking, like, ‘Maybe this is not the right move. Being a nurse is not the right move.’ It’s just — our work is so undervalued.”

Neither woman really wants to leave nursing. They both see it as a calling. But they want better pay and more support to get the job done.