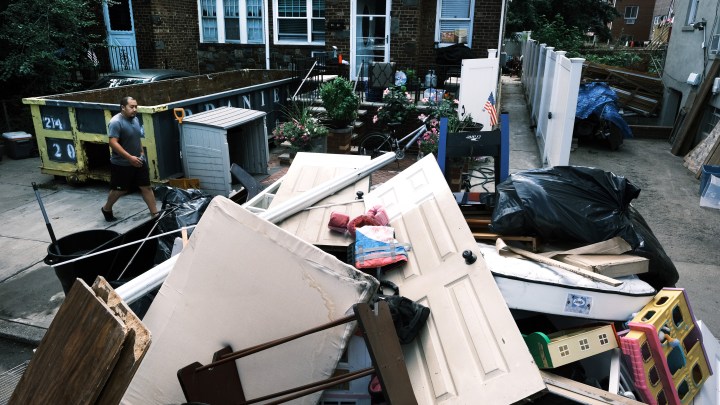 COPY
People clean up their flooded homes in Queens, New York, after the remnants of Ida passed through the area. The storm hit undocumented immigrants particularly hard. Spencer Platt via Getty Images

People clean up their flooded homes in Queens, New York, after the remnants of Ida passed through the area. The storm hit undocumented immigrants particularly hard. Spencer Platt via Getty Images
Listen Now

Just before 9:30 on the night of Sept. 1, the National Weather Service issued a flash flood emergency for New York City, for the first time ever.

At the time, Alejandro and his partner, Diana, whose last names we’re withholding because they’re undocumented, were in their basement apartment in Brooklyn, New York.

“It was really pouring, and the water started coming from the windows and from the side of the walls, also through the bathroom to the apartment,” Alejandro said.

At first, they tried mopping, but it just kept coming. Within about half an hour, Diana said, the apartment was completely flooded, and it no longer felt safe. They went outside and spent the rest of the night in their car.

The next morning when they went back in, everything was soaked — their furniture, their clothes, the floors, the walls. They had to throw almost everything away.

“I felt so sad, honestly,” Diana said. “I didn’t expect anything like that here. It was bad for me.”

The rain, from the remnants of Hurricane Ida, was so intense and came down so quickly that it flooded parts of New York City that no one expected to be flooded — at least, not nearly as bad as they were.

That included a lot of basement apartments, mostly in Queens and Brooklyn. More than a dozen people died in those apartments. Many others lost almost everything they owned.

Most of the people living in the hardest-hit apartments were low-income, and most were immigrants.

“Unfortunately it’s a repeating story,” said Carlos Martín at the Brookings Institution and the Joint Center for Housing Studies at Harvard. “We see the most vulnerable people — this includes low-income people, people of color and people with mixed immigration status — living in precarious housing that is more likely to be damaged by these disasters.”

Often because it’s the only housing they can afford — particularly in expensive cities like New York.

In New York, a lot of low-income, immigrant families end up living in illegal basement apartments that are increasingly vulnerable to flooding.

“So they’re paying extremely low rents, but they take on the risk of living in an apartment or building that is not meant for, really, people to live in,” said Lina Lee, executive director at Communities Resist, a tenant legal services organization. “And these tenants have nowhere else to go.”

Many of them aren’t eligible for disaster aid from the Federal Emergency Management Agency either because they’re undocumented. “So the families that were most affected were completely locked out of access to any of these resources,” Lee said.

Because of that, the state and city of New York created a $27 million relief fund a few weeks after the storm to help undocumented New Yorkers excluded from FEMA aid. Each household is eligible for up to $72,000 in assistance to replace furniture, make home repairs, pay for funeral or medical expenses or maybe even relocate.

On a recent Tuesday, Alejandro and Diana brought their application, along with their lease, all sorts of receipts and photos of their flood-damaged apartment, to an office of the Chinese American Planning Council, the community organization designated to help people in Brooklyn apply for the fund.

Two months after the flood, they’re still living in their apartment with just an air mattress and the one table they were able to salvage.

But they also have nowhere else to go.

They’re hoping that soon, maybe, they will get enough money from New York’s relief fund to be able to move out, Alejandro said, “and buy, let’s say, a bed, a proper bed, a table. You know, basic stuff. That’s it.”

And begin to start over. 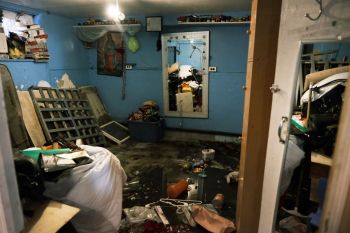 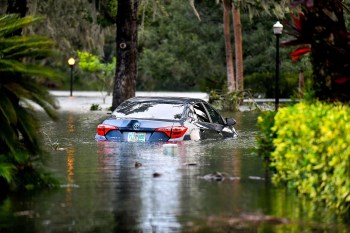