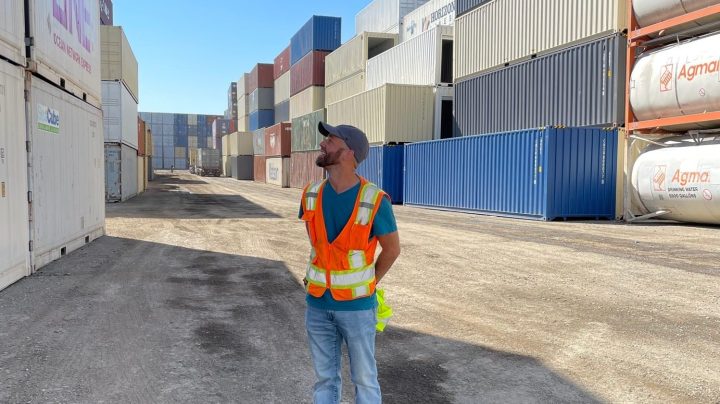 COPY
Sales manager Carlos Carrillo at ConGlobal Industries' container storage depot. After unloading, he said, "they terminate here before they go out back to China or wherever it may be.” Andie Corban/Marketplace
Temporarily Unavailable

Sales manager Carlos Carrillo at ConGlobal Industries' container storage depot. After unloading, he said, "they terminate here before they go out back to China or wherever it may be.” Andie Corban/Marketplace
Listen Now

As of Tuesday, 77 container ships were waiting to dock at the ports of Los Angeles and Long Beach. Most container ships like these hold between 10,000 and 21,000 20-foot standard shipping containers, referred to as TEUs, or twenty-foot equivalent units. Once ships are docked and containers are unloaded, storing those containers before their next voyage is another critical step in the global shipping process.

About 15 minutes inland from the ports is a container depot run by ConGlobal Industries. The 25-acre dirt lot is covered with rows of shipping containers, mostly 20 and 40 feet long, stacked five high.

“The core business here is storage and repairs of the containers,” Carrillo said. “Containers come here from China with cargo, they get unloaded somewhere in L.A. and they terminate here before they go out back to China or wherever it may be.”

The yard holds up to 10,500 TEUs. To bring containers into the yard for storage and repair evaluation before their next trip, trucks carrying one container each line up on the long, dirt road in and out of the depot. Then a forklift picks up the shipping container and places it at the top of a container stack, which can rise more than 42 feet. Some of the containers at the yard are new, while others have been in circulation for more than 10 years and are covered with rust and dents.

“Leasing companies own these containers,” Carrillo said. “Then, they put them out to lease to steamship lines or other corporations like Walmart and Target, anyone who needs containers to move product from China to here. They put them out on a master lease — typically seven years, but it can be longer than that.”

For months, there’s been talk of a shortage of shipping containers, the majority of which are manufactured in China. Earlier in the pandemic, production of new containers halted completely. More recently, the prices of raw materials used in making containers has gone up, as have labor costs. While large corporations have been able to pay more for containers, smaller retailers often can’t afford the price spikes. According to Freightos, the cost of shipping a standard 40-foot container from East Asia to the West Coast of North America has more than quadrupled in the past year, from $3,844 to $16,884.

The costs charged by the Wilmington depot, however, haven't budged. Storing a 40-foot container there costs between $1.50 and $1.80 a day.

"There's a bunch of containers that just have been sitting here for years," Carrillo said. "That's all up to the leasing company or owners of the containers to say when they want them."

Chinese manufacturers are producing record volumes of new containers, though experts say the current container problem has more to do with moving them to the right places than increasing the number in circulation. But moving containers happens slowly and is reliant on trucking, an industry that's facing a shortage of its own.

"About a month ago, when we had containers being dropped off, we had a traffic jam about 3 miles out from here," Carrillo said. "We had police show up a few times to try and clear it up. But there's not much that can be done. This is a very narrow road, and these trucks need a lot of space to turn. And we only have one way in and one way out."