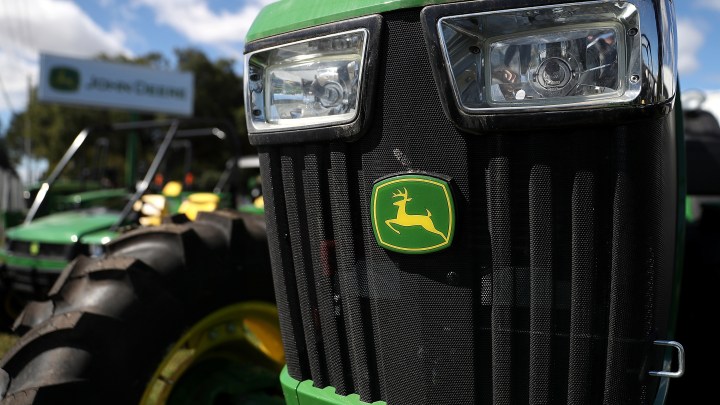 COPY
More than one-third of John Deere’s workforce in the U.S. and Canada are on strike. Justin Sullivan via Getty Images

More than one-third of John Deere’s workforce in the U.S. and Canada are on strike. Justin Sullivan via Getty Images
Listen Now

More than 10,000 workers went on strike Thursday from Moline, Illinois-based John Deere — maker of those big green tractors and other farm and construction equipment — after they rejected a deal on wages and benefits.

The strike covers more than one-third of the company’s workforce in the United States and Canada. John Deere is, of course, one of the big names of the country’s agricultural economy.

In Bakersfield, California, Edwin Camp grows tangerines and vegetables, and he’s just wrapping up his fall almond harvest. He’s worried a prolonged strike could make it hard to find the equipment he needs, a problem he’s already facing.

“We’ve had all kinds of supply chain problems, yes — the inability to get items when you want it,” Camp said.

He isn’t just a farmer; he also owns a John Deere dealership with four stores in the Central Valley — another side of the supply chain. That hasn’t been easy either.

“I mean, it’s not like you’ve got big inventories built,” he said. “You got by, you take care of your customers. But then the strike hits and what can you get or not get?”

If the strike goes on long enough to be a problem for Camp, he expects his customers — the other farmers — to be frustrated, too.

Brian Duncan is vice president of the Illinois Farm Bureau and a livestock and soybean farmer.

He’s also plenty familiar with the fragile state of the farm economy — even without a strike — and is having trouble finding things: “pesticides, herbicides, fertilizer, the equipment that we run, the parts that we need,” he said. “I’m not even sure the suppliers know entirely what is going on.”

Being in Illinois, home of John Deere, the strike feels kind of personal.

“It’s important not only for us on the farm to get these issues resolved, but for the people that work in our communities,” Duncan said.

It’s not just about the U.S., said Dan Sumner, University of California, Davis, agricultural economist. “John Deere is the largest farm equipment company in the world,” he said.

Sumner said demand for Deere tractors has been high, and the company has been doing well. The strike could get in the way of that, he added, depending on how long it goes.