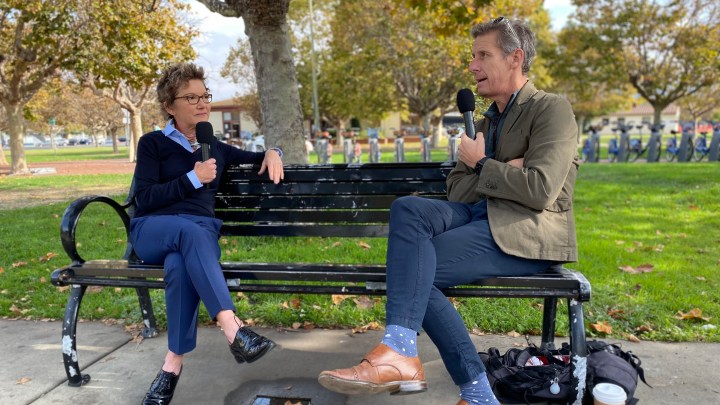 COPY
Mary Daly, president and CEO of the Federal Reserve Bank of San Francisco, with "Marketplace" host Kai Ryssdal. "If we don't have the people's trust, then nothing we do will matter," she said. Sean McHenry/Marketplace

Mary Daly, president and CEO of the Federal Reserve Bank of San Francisco, with "Marketplace" host Kai Ryssdal. "If we don't have the people's trust, then nothing we do will matter," she said. Sean McHenry/Marketplace
Listen Now

From supply shocks to the battle with the delta variant, there’s a lot of uncertainty ahead for members of the Federal Reserve’s Federal Open Market Committee. At its last meeting, the FOMC signaled it may soon start reducing the economic support the Fed put in place at the onset of the pandemic. But according to Mary Daly, president and CEO of the Federal Reserve Bank of San Francisco and a voting member of the FOMC, that uncertainty doesn’t change what Fed officials have always done: watch and respond.

Daly, who has been in the position since 2018 and has worked at the Fed for 25 years, oversees the central bank’s 12th District, which accounts for one-fifth of the country’s population. She met with “Marketplace” host Kai Ryssdal near Lake Merritt in downtown Oakland, where they spoke about a variety of issues, including inflation, the political impasse on the debt ceiling and why trust is crucial to the Fed. The following is an edited transcript of their conversation.

Kai Ryssdal: How do you factor in the inflation thing? Because yes, transitory, but people are noticing.

Mary Daly: Well, sure, they’re noticing because they’re paying more for food, gas. If you want to travel, your prices are higher. That’s right in people’s pocketbooks. And if you look around my community in Oakland — as you know, there are many low- and moderate-income components of Oakland — they feel it. What I also know, though, is that they want jobs. And the balancing act we have is between looking through some of the shocks to inflation, keeping your eye 18 months from now, and as COVID rolls off, we’re gonna see inflation come down. That’s my hope. I got to keep data dependency, that’s what I see. And then those individuals are going to continue to engage and get in the labor market. That’s what we need.

Ryssdal: Are you whistling past the graveyard or you’re reasonably confident?

Daly: I am more confident than whistling past the graveyard, for sure. But I also recognize that you need also a lot of humility. We are in one of the most uncertain times in my memory at the Fed. I’ve worked here 25 years doing this type of work. Boy, the world is uncertain. And so you have to keep your eye on the data and keep watching.

Daly: Well, you know, it’s interesting. I think we do have that characterization. We’re tightly controlled. But here’s what we really are: We are responsible for taking what comes. So we are agile. We have to watch, and we can’t overreact to say, “Nothing bad is happening, we’re good,” or “Everything bad is happening, we have to raise rates to ratchet it back.” Neither one of those extreme postures, those reactive ones, would be good.

Ryssdal: I wonder how to ask this question in a way that won’t bug you.

Ryssdal: Well, I want to, I want to be fair to the question, right? Chair [Jerome] Powell and members of the FOMC and regional Fed presidents spent a lot of time in the beginning of this pandemic saying, “You know what? We got it. We’re here, it’s OK. It’s going to be transitory.” And maybe it’s not.

Daly: We don’t know yet. And so it is absolutely understandable to me that people are worried. I completely get it because there is this perception that “transitory” means quick to recede. But it doesn’t mean quick to recede, it means unlikely to persist when COVID is past us, unlikely to persist when the supply shocks have moderated. Will it last longer than we want? Absolutely. I’d say it already has. Does that mean it will be here forever or that we’re behind the curve? Not in my judgment.

Ryssdal: Let me take a little turn now to the fiscal agents and to the politicization of the American economy. We are approaching a debt limit [crisis] — I’m going to use the word “crisis” on purpose. How worried are you?

Daly: Well, if we get close to this debt limit, and there is no sense that it’s going to be resolved, I am worried because we really can’t afford more shocks to the economy. We still are in recovery mode, so I would consider that a tremendous crisis. It could have devastating effects on the financial system. And I just go to bed each night having the faith in our elected officials that they’ll do the right thing.

Ryssdal: OK, this question is gonna get me in trouble, but why do you have that faith? I mean, the evidence is kind of against you.

Daly: I see time and time again that even though people battle off and have this, you know, sense of brinksmanship, when we get right down to it, they recognize that if we default on our debt, there are lasting consequences that we hand not only to ourselves, not only today, but to future generations. We depend on others thinking that we’re trustworthy in paying our debts. That’s a commitment that I just have to believe every elected official takes to heart.

Ryssdal: Back to the idea of the Federal Reserve being a controlled organization. I know you all spend a lot of time thinking about your communications. You give speeches, other Fed presidents give speeches, members of the Federal Open Market Committee [as well] and [the] interviews that you do. When, I guess, your people came to you and said, “Hey, listen, Marketplace wants to talk,” what’s the calculation? Who are you trying to get to in your communication strategy?

Daly: Oh, that’s a terrific question. You know, in my world, and now you’re gonna call me naive or maybe Pollyanna —

Daly: But I want to reach every American because ultimately our work is about every American, so when my team comes to me and says, “People want to talk to you,” I say, “Where are they in the span of people that we need to reach?” Because if we only talk to people who already knew who we are, then we’ve reached no one. I’m trying to reach people who might say, “Mary, I don’t really see what you’re doing. In fact, my prices are going up, my house is hard to afford, and what are you doing for me?” Those are the people I want to talk to.

Ryssdal: Another question about the Fed as an institution. No matter how well you communicate, you all have to be trustworthy. There have been some incidents the last two weeks with Rob Kaplan at the Dallas Fed and Eric Rosengren at the Boston Fed. The inspector general at the Fed is looking at this, the trades and the trustworthiness. What’s your reaction?

Daly: Trust is our most important tool. If we don’t have the people’s trust, then nothing we do will matter because if you think about monetary policy and how it works, it works because we say we’re going to lower the interest rate and it transmits through the marketplace. People have to know that we’re doing our work for them, not for our own profits, so this has been a very disappointing couple of weeks. And I take it extraordinarily seriously, and you know, I welcome the review that we’re doing because ultimately, what I want to be able to do is look not Congress or others in the eye, but the average person, and say, “You can trust me.”

Ryssdal: When you heard about Kaplan and Rosengren, did you say they’ve got to resign?

Daly: You know, I really work on this principle that people themselves will do the right thing. And I don’t offer my judgment. I offer my support for doing the hard work we need to do, which is to build back whatever trust we’ve lost. Trust is not something you get and hold, it’s something you get and earn every single day.