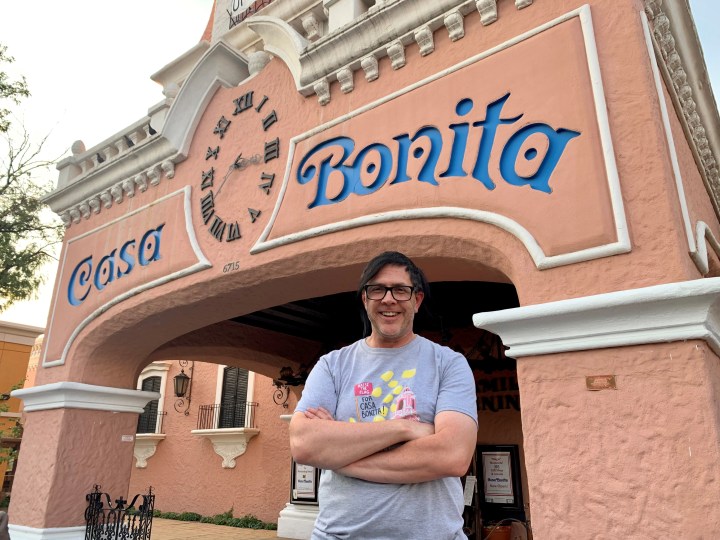 COPY
Andrew Novick, "possibly Casa Bonita's No. 1 fan," has been leading a campaign to save the legendary restaurant, which filed for bankruptcy in April 2021. Amy Scott/Marketplace

Andrew Novick, "possibly Casa Bonita's No. 1 fan," has been leading a campaign to save the legendary restaurant, which filed for bankruptcy in April 2021. Amy Scott/Marketplace
Listen Now

In a strip mall in Lakewood, Colorado, between a Dollar Tree and an art supply store, there’s a pink stucco palace topped with a gold dome and a statue of an Aztec emperor. This is Casa Bonita, a Mexican-themed wonderland that occupies 52,000 square feet of suburban Denver real estate, and a special place in the hearts of generations of Colorado kids — like me.

I grew up in Colorado Springs, about an hour south of Denver, and a trip to Casa Bonita was like going to Disneyland. There were cliff divers plunging from a 30-foot waterfall, an arcade and puppet theater. You could get an old-timey picture taken in a fake jail, and crawl through a scary pirate’s cave. The place was so magical, “South Park” creators Trey Parker and Matt Stone, who also grew up in Colorado, devoted a whole episode to Casa Bonita in 2003.

Some of us have never outgrown it.

Novick started racking up those visits when he was little. His mom worked at a medical lab around the corner from Casa Bonita. On Saturdays she’d bring the kids with her.

“My brother and I would, like, look through the microscopes at blood samples, and she’d give us the counter to count cells and stuff, and kind of put us to work,” he said.

As a reward, they’d go to Casa Bonita.

I met Novick outside for visit #307. The restaurant has been closed since the start of the pandemic. While other businesses survived doing takeout, that wasn’t really an option for Casa Bonita.

“As we know, it’s not really about the food, right?” he said, diplomatically.

In fact, the food was notoriously mediocre — except for the sopapillas, squares of fried dough you’d douse with honey. There was even a little red flag on the table you could raise to get more. Novick, for the record, loves the food and pretty much every single thing about the place. And months after the economy reopened but Casa Bonita still hadn’t and its website went down, he got worried.

“Whenever anything happens with Casa Bonita, everyone writes me, texts me: ‘What’s going on?’” he said.

So Novick and some friends in the art and restaurant worlds started a campaign to save Casa Bonita. They raised more than $68,000 on GoFundMe. In April, the owner, Summit Family Restaurants, filed for Chapter 11 bankruptcy protection. The campaign used the funds to pay off the mariachi band and other small creditors.

“We weren’t trying to bail out Casa Bonita,” Novick said. “We were trying to get the attention of investors to actually acquire Casa Bonita.”

But they weren’t the only ones with their eyes on the pink palace. Earlier this summer, Parker and Stone, the “South Park” creators, told the Hollywood Reporter they were trying to buy it, too.

By then, Casa Bonita had reopened for tours to stave off eviction. Entertainment director Dawn Mestas, 25, led Novick and me through the maze where in pre-pandemic times there would have likely been a line of families waiting to order gloppy enchiladas and green chile burrito platters. (You had to buy food to get in.) I remembered the excitement I felt as a kid sliding my tray down the long counter to be seated.

“Now as we turn the corner, you are magically transported to a night in old Mexico,” Mestas said with dramatic flair. “Welcome to the warmth, beauty and splendor of Casa Bonita!”

There was that familiar swimming pool smell, as the waterfall came into view.

“Oh, it looks like one of our performers is up there,” Mestas said, spotting a man in swim trunks clinging to the cliff wall. We paused among the artificial palm trees to watch him execute a perfect swan dive and disappear into a tiny pool below.

As a kid I’d always wondered where the divers came out. Mestas took us into a narrow, dank room with a rack of costumes, and there it was — a small hole in the floor leading into an underwater tunnel.

All the uncertainty around Casa Bonita’s fate has been hard on the staff, Mestas said, many of whom had been there for decades.

“A lot of us got really nervous and started looking for other jobs,” she said.

For a while, Mestas worked as an axe-throwing instructor and picked up extra hours at a ramen shop. By mid-August, many of the staff were back and gearing up to fully reopen, though the timing — and future ownership — were still unclear.

“As far me and my workers, we just want this place open,” she said.

“Chains are kind of wiping off the uniqueness off cities,” he said, “I think saving our old favorites is really important.”

He was still hoping his investor group would be the ones to save it. They had made an offer, and received what Andrew called a “reasonable counter-offer” from the owner.

Then the very next day, in a live stream with Colorado Gov. Jared Polis, Parker and Stone made an announcement about Casa Bonita’s pending bankruptcy proceedings. Stone told the governor, “We’ve come to an agreement with the owner, and we bought it.”

They were so giddy, it’s clear they love the place. And it could use some love. Casa Bonita was profitable before the pandemic, but former staff told me it needed some major upgrades.

Novick was crushed by the news.

“I hope it’s not going to be like a ‘South Park’ land amusement park,” he said. “I think that everything about it pretty much is how it should remain.”

One change almost everyone probably will like: They say they’re going to improve the food. 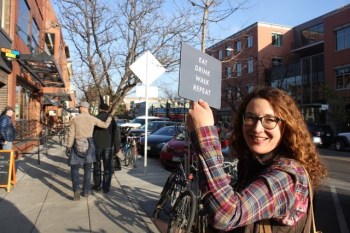