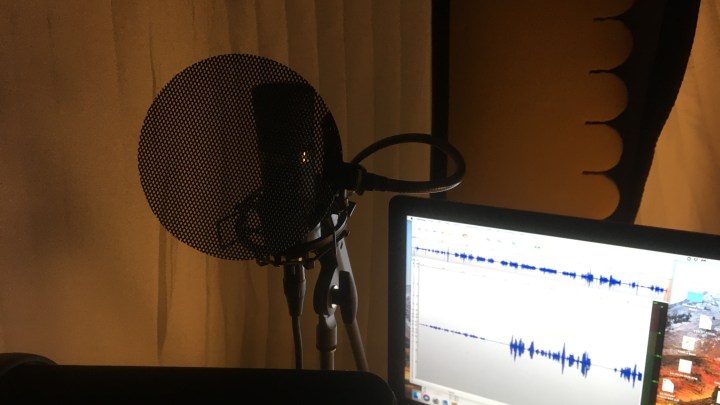 COPY
An interior of Carol Wrobleski's home studio. "I had a lot of people come in, drill nails in my walls and set up all kinds of foam," Wroblesk said. "The hard part is getting a studio space that has the sound quality that you need." Photo courtesy of Carol Wrobleski
My Economy

An interior of Carol Wrobleski's home studio. "I had a lot of people come in, drill nails in my walls and set up all kinds of foam," Wroblesk said. "The hard part is getting a studio space that has the sound quality that you need." Photo courtesy of Carol Wrobleski
Listen Now

After getting laid off from her job as an administrative assistant last fall, Carol Wrobleski decided to turn her closet into a voiceover booth. She hoped to audition for audiobooks and ended up spending $4,000 on coaching and equipment. But when another full time opportunity came up, she decided to put her voiceover career on hold. The following is her story.

Last fall, I was laid off from a job I’d had for about a year, and I went on unemployment right away. I have to say, I was really worried because I’m not a young woman anymore. I’m an older woman. And I felt that my job prospects might be pretty limited. I thought, “Well, what could I do from home that would make sense?” And I had done some on-air radio work. I’ve done a few film narrations, and I thought, “Well, what the heck, I’ll try voiceover. I’ll just see how it goes.”

And so I bought a ton of equipment. I invested in some workshops and some coaching. Right now, I’m sitting in a closet that has a lot of acoustical blankets hung up. I had a lot of people come in, drill nails in my walls and set up all kinds of foam and stuff like that. The hard part is getting a studio space that has the sound quality that you need, especially for things like audiobooks, They’re very particular, and that was sort of my goal when I started this. I sent in two or three, I think, audition tapes. Didn’t get the job but they say, you know, it’s a numbers game. You just need to submit a lot of auditions.

And then this job at Smith College opened up. I applied for it and I thought, “Do I really want a full-time job?” I wanted to be able to keep doing what I was doing, but, you know, the practicalities of life are such that I’m a single woman. I have two kids in their 20s. I need the health insurance, and it was just the right move to take the job.

Crafting an audiobook is something very new and it takes a lot of nuance and time, so I felt like, “OK, I’m not really ready to take that challenge on yet.” But when I really add it all up, it was more than I really wanted it to be. It was about $4,000, but that’s another reason why I thought, “OK, if I don’t do this, I’ve basically thrown $4,000 away and that hurts.” Now that I’m back in the studio. It just feels really fun to be here and and I have some work to do to get my audio in better condition, but my hope will be in mid-September to give it a try again.