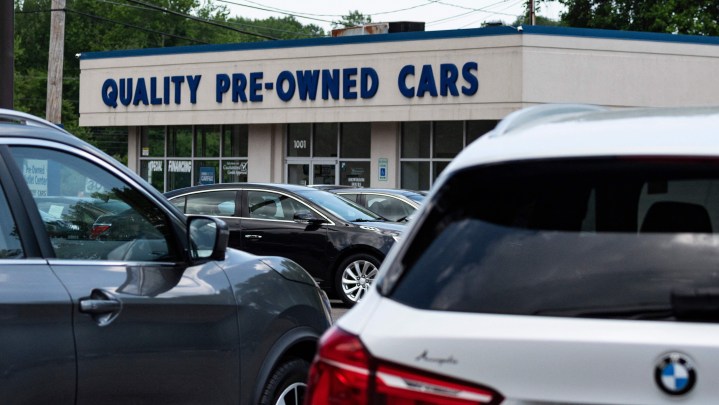 COPY
The number of available used cars for sale is creeping back up after low inventory. Prices for the vehicles may peak this month. Jim Watson/AFP via Getty Images

The number of available used cars for sale is creeping back up after low inventory. Prices for the vehicles may peak this month. Jim Watson/AFP via Getty Images
Listen Now

As anyone who’s looked for a used car lately can probably tell you, there have not been many options. Demand has been huge, supply hasn’t been able to keep up, so prices have soared.

Now the supply of used cars, at least, is back to normal, according to an analysis by Manheim Consulting, which keeps tabs on that market.

Inventory was especially low in April — 30% below what it was in 2019, according to Jonathan Smoke, chief economist at Cox Automotive.

“But in recent weeks, we’ve seen inventory tick up and we’ve seen … the sales pace slow,” Smoke said. “So as a result, we’re … about back to normal.”

One of the main reasons why?

“The high prices of used cars have brought a lot of cars out of the woodwork,” said Sam Fiorani at AutoForecast Solutions.

“People who have second or third or fourth cars are getting rid of them to cash in on the high prices,” he said.

And dealerships are making very enticing offers to people who trade in used cars right now.

“In a lot of cases, people are actually making money on their used vehicles. And that has not happened in years,” said Carla Bailo, president and CEO of the Center for Automotive Research.

She said demand has also cooled a bit because prices are so high.

“Consumers have very limited choice right now. Inflation has gone up in many other areas of their lives. So, if you don’t need to buy a car … now is not the best time to do it,” Bailo said.

But things could get better for buyers soon, now that supply and demand are a bit more in line, Smoke said.

“I believe that we’re likely looking at the peak of retail prices this month, in July,” he said.