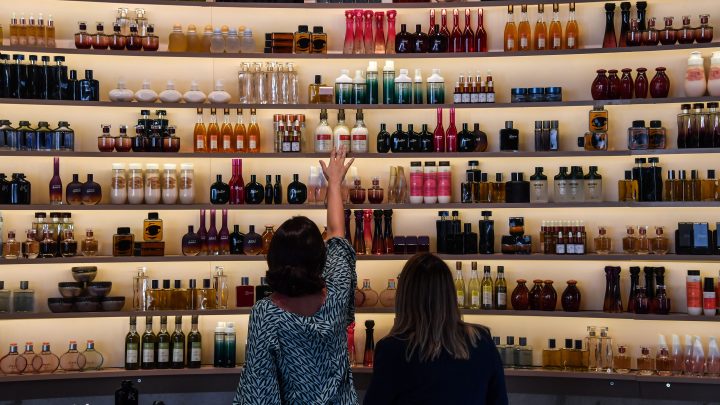 COPY
According to Vox senior reporter Rebecca Jennings, viral videos on TikTok are playing an increasingly important role in the stuff people buy. Photo by Nelson Almeida/AFP via Getty Images

Over the past 18 months, pandemic-related factory shutdowns and shifts in consumer behavior have resulted in a series of shortages that have rippled through the global economy. Now, there’s another powerful economic force causing a growing list of products — ranging from feta cheese to a specific brand of catnip — to sell out or become difficult to find: TikTok.

Rebecca Jennings is a senior reporter for Vox who covers internet culture who wrote recently about the life cycle of viral products. The following is an edited transcript of her conversation with “Marketplace” host Kai Ryssdal about the growing popularity of TikTok product reviews.

Kai Ryssdal: I would like to start, if I might, with you in the mascara/cosmetics aisle at Target being really sad. Tell me what happened.

Rebecca Jennings: Yes, so I was searching for this mascara I’d seen on TikTok. I watched some girl put it on and I was like, “OK, that really works.” And then I saw another girl put it on, and it really worked on her, too. So I was scouring the aisles of a Target. All of a sudden, I come across these two teenage girls who are standing right in front of the aisle where I’m pretty sure it is, and they just looked so sad. And I hear one of them say, like, “It’s sold out.” And I’m like, “Oh, they’re definitely going to the same mascara that I was looking for,” and … they were.

Ryssdal: Yeah so look, there’s Instagram, there’s Facebook, there are all kinds of places that you can buy stuff online. It does seem that TikTok has a little extra special something when it comes to getting people to buy stuff.

Jennings: Yeah, absolutely, and there are a few reasons for that. I think anybody that you know is a little bit familiar with TikTok knows that a random person or a random song can just go from total obscurity to overnight fame on that app, more so than pretty much any other app that’s out there. And that’s mainly due to its algorithm. Even if you don’t have a ton of followers, if enough people see and like and engage with your video, all of a sudden, your face can be on millions of people’s screens within a couple of hours.

Ryssdal: So you have to figure that, you know, just to stay with cosmetics for a minute, like L’Oréal and whoever else, CoverGirl or whatever, they’re watching TikTok. I mean, there’s probably somebody whose job to sit there and go on TikTok all day.

Jennings: Yeah, of course. I mean, right now, the idea of the focus group is so outdated because you can have marketing experts just kind of watching. It’s [called] “social listening.” They’re watching social media, watching the conversations happening and figuring out how to respond to it as it’s happening in real-time.

Ryssdal: Can we talk for a minute about some of the people who are making these TikToks that have become stars? You talked about one woman in your article who, I confess, last night as I was prepping for this interview, I spent like 10 minutes watching this woman, Mikayla, out of Boston do cosmetic stuff. It was crazy.

Jennings: Oh, she is so watchable. I love her. She’s so much fun to watch. And all she really does is like, tell you about these beauty products that she’s really into. She’s obviously an incredibly talented makeup artist. She was working at an Ulta before lockdown, she was out of a job, and then she went on TikTok, and she’s gained millions of followers and she made over a $1 million last year, just telling people what to buy.

Ryssdal: Yeah, that was the thing, right? You asked her about what she was making and she’s like “Oh, I just did my taxes. It’s over a million dollars,” and like, really? I am in the wrong line of work.

Jennings: I know! And I’m used to people not answering that question for me, but she was like, “Oh, I actually do know. I just did my taxes.” I was like, “Oh, my God, congrats.”

Ryssdal: Yeah, this next question is going to make me sound like the guy who comes from public radio where we do finely crafted, eight-minute-long, complicated, deeply produced audio stories: Does it matter to anybody that the production values in these videos are, like, lousy? There’s like jump cuts and random things, and it just bugged me, I’ve got to tell you.

Jennings: I mean, I think that’s actually a real big drawing point for a lot of people, especially for younger people who are used to that kind of low-fi aesthetic that we get online all the time. And I do think that adds to the familiarity. You feel like you’re friends with these people, you feel like you’re FaceTiming with them. And so when you watch someone like Mikayla talking about beauty products, you’re like, “Oh, yeah, it’s just like a friend telling me about this thing she bought and that makes me want to buy it.”

Ryssdal: Yeah, she definitely has what it takes to get the message across on video, I’ll tell you that. OK, super serious question: Does anybody — either the content providers, the influencers or the people who are watching all these videos — does it bother them, do you suppose, that the Chinese government is hoovering up all this data that they’re providing through TikTok?

Jennings: Yeah, so the question of the fact that TikTok is headquartered in China has two real complications, and one is that, you know, they own all of the data on TikTok, which could then theoretically be used for any kind of nefarious purpose that you might think of. The other question, though, that I think that more people are concerned about, is the question of censorship and moderation. If something is going on on TikTok that say, TikTok — or ByteDance, its parent company — doesn’t like, it has the power to flip that switch and make it go away. I think that is the larger concern for both security experts that I’ve spoken to and for creators.

Ryssdal: OK, so you didn’t get the mascara. What else have you gone shopping for on TikTok, and did you get it or was it sold out?

Jennings: Well, to be fair, I did find it online. So you know, the internet giveth. But another thing that I bought from TikTok was this other beauty product. It’s this green sunscreen that gets rid of your redness. It works great. It’s wicked expensive, and I’m mad that TikTok made me buy it, because it actually works great and now I need to buy it again.