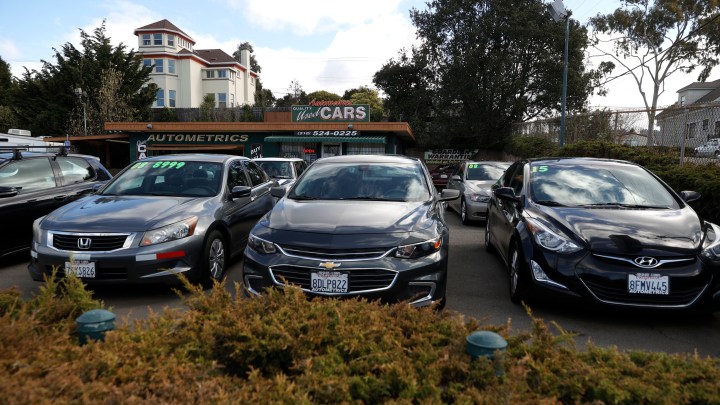 COPY
Availability is part of the equation that has boosted the prices of some used-car models. Justin Sullivan via Getty Images

Availability is part of the equation that has boosted the prices of some used-car models. Justin Sullivan via Getty Images
Listen Now

When the consumer price index comes out Tuesday, we’ll get new numbers on everything from food and beverages to clothing and used cars. And on that front, there’s a quirk.

Some models are so popular that used cars are selling for more than this year’s release off the assembly line. An analysis of car prices by the website iSeeCars showed that 16 models of 2019 vehicles were more expensive than their new counterparts in June.

Geoffrey Koch was shopping for used cars in Nashville, Tennessee, after his ‘99 Honda Civic kicked the bucket last year. He said he has great credit, so “I’m like, I am surely just going to get the deal of the century. It’s going to be great,” he said.

Koch strolled into car dealerships ready to pay about $15,000. But then he saw the sticker prices.

There’s a simple reason for that. “Demand is huge, supply is low,” said Karl Brauer, executive analyst with iSeeCars.

New-car buyers might have to wait two or three months. Meanwhile, the 2019 model could be right there on the lot.

“Even if it’s slightly more expensive than the new one, you can drive away with it today,” he said.

Brauer said if shoppers can wait, they should. That’s what Koch is going to do.

“If I’m going to be dropping a lot of money, it’s going to be what I want,” he said. Koch added that he’s going to share his girlfriend’s car until he saves up a bit more.