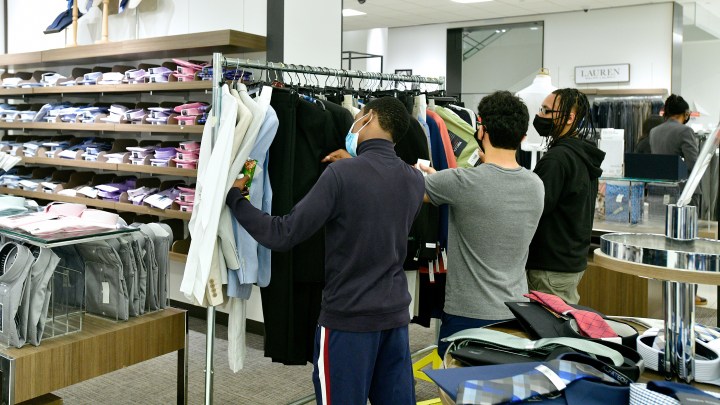 COPY
Clothing sales surged in May — a sign that people are starting to go out and do things again. Eugene Gologursky/Getty Images for Macy's

Clothing sales surged in May — a sign that people are starting to go out and do things again. Eugene Gologursky/Getty Images for Macy's
Listen Now

We got a definitely not-so-great-sounding number Tuesday for a crucial part of the economy — retail sales, which is consumers buying stuff at physical stores and online stores, also bars and restaurants. And that retail-sales number was down 1.3% in May from April. It was well below what economists were expecting, with some especially big drops for big-ticket items like cars and trucks, furniture and home-improvement supplies, computers and appliances.

And with the economy in the midst of reopening and rebounding as vaccination spreads and more folks get back to work, a backslide in monthly retail sales could seem like — maybe — a warning sign of trouble to come.

I’m just back from a week of vacation. It was the first time I’ve flown anywhere — Portland, Oregon, to Tampa, Florida, to New York — and the first time I’ve seen my aging parents since the pandemic hit. For my trip, I got a haircut, airline tickets and a rental car — spending that isn’t counted in the retail-sales report, said Ted Rossman at CreditCards.com.

“This report mostly measures goods sales,” he said, like cars, computers, appliances. Which consumers spent a lot on when government relief checks arrived earlier this year.

But Mark Zandi at Moody’s Analytics said that as the economy reopens, “consumers are shifting from buying stuff to buying things like going to restaurants, ballgames. I went to my first movie in a year and a half.”

In fact, clothing sales surged in May, which Rossman said is also a sign of this move to “doing stuff.”

“People are sprucing up their wardrobes, they’re going back to the office, getting invited to events again, including weddings and graduations and family reunions and things where they want to look nice,” Rossman said.

The return to spending on a wide variety of consumer services is coming in fits and starts. Chris Jackson, at polling firm Ipsos, said people are increasingly confident as more of us get vaccinated against the coronavirus.

But “it’s important to remember that most people aren’t light switches, where they just switch on and off,” Jackson said. “And they do still have very real concerns, so they’re sort of taking sort of baby steps back into the world.”

It’s likely to be some time before all this consumer-behavior shifting is done, and we can trust a single monthly retail-sales report to tell us what the economy’s really doing.