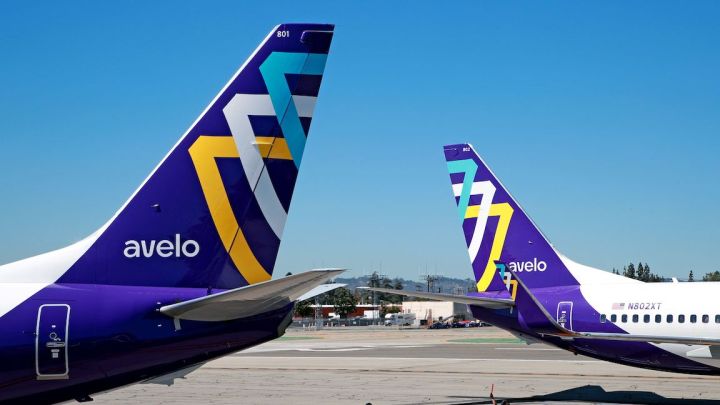 COPY
Avelo Airlines was the first low-cost air carrier to start up in 2021, taking flight just a month ago. Joe Scarnici/Getty Images for Avelo Air

Avelo Airlines was the first low-cost air carrier to start up in 2021, taking flight just a month ago. Joe Scarnici/Getty Images for Avelo Air
Listen Now

There’s a new airline taking off in the U.S. tomorrow: Breeze Airways, which will mostly fly in the South and East.

Its first flight departs Tampa, Florida at 10:30 a.m Eastern, bound for Charleston, South Carolina. It’s the second low-cost carrier to start service this year –– Avelo Airlines started flying just last month in the West. It’s striking that the two have kicked off in such a short space of time; establishing a new airline in the U.S. is not easy.

“The risks are huge. The graveyard of failed startup airlines in the U.S. is large and deep,” said Edward Russell, who covers the industry for Skift and Airline Weekly. For one thing, Russell said, there’s intense competition. “Major airlines often come in and will add flights on routes [that] start-up carriers add.” That’s already happening to Avelo, he said, on some of its brand new routes.

Starting and running an airline also just costs a lot of money, said Savi Syth, an industry analyst at Raymond James. “Aircraft are expensive,” Syth said, as are fuel and labor.

In some ways, Syth added, coming out of a pandemic is probably one of the best possible times to launch a new leisure-focused airline. “Because of the success of the vaccines, and people having been locked in for a long time, there’s a lot of pent-up demand for leisure travel,” Syth said.

So much pent-up demand, in fact, that a Wells Fargo economist estimates four-and-a-half years of travel spending could happen in the next nine months.

Breeze Airways chief executive David Neeleman said the pandemic has helped bring down at least one of its big start-up costs –– the cost of planes. The airline has also automated a lot of things, he said. And everyone answering customer questions is working from home. “That allows you to keep your costs low,” Neeleman said.

It’s the first time in a while that two new airlines are entering the market at once. “It seems like a pretty great deal for consumers. Consumers are going to have way more choice,” said Veronique de Rugy, a senior research fellow at  the Mercatus Center at George Mason University.

For cheaper flights. At least, for now.