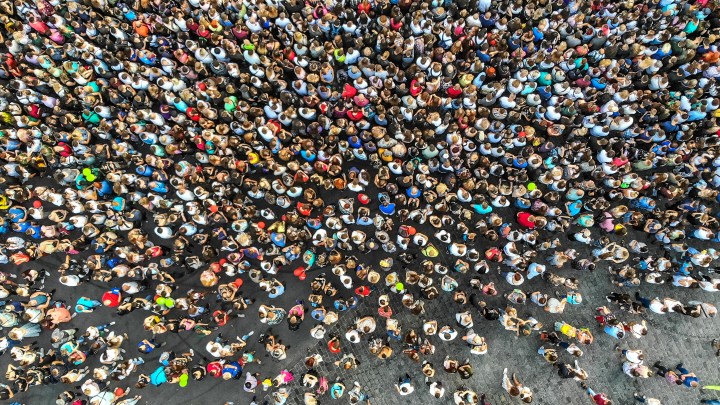 In theory, the economy can continue to grow with a stable population. In practice, not so much. Dmytro Varavin via Getty Images
I've Always Wondered ...

In theory, the economy can continue to grow with a stable population. In practice, not so much. Dmytro Varavin via Getty Images

Marketplace listener Kelly MacLellan wrote in with this question:

I’m curious if there are any alternative models that don’t rely on indefinite population growth for economic growth. Recently, the news of falling birth rates has been framed as a “crisis,” but some theories related to population and the climate suggest we can continue growth without indefinitely more people … I think. I’d love to hear one of your experts offer some perspectives that might mean we can thrive without ongoing population growth.

The projected COVID-19 “baby bust” could result in 300,000 to 500,000 fewer births in the United States this year. And while that might be a blip due to the pandemic, the world population is expected to virtually stop growing by the end of this century, according to Pew Research. So can we keep growing the economy without growing the population?

First, economic growth is a sought after goal because it leads to an increase in the standard of living. Mira Farka, an associate professor of economics at California State University, Fullerton, said the difference between 2% annual GDP growth and 3% annual GDP growth by 2050 is a difference of a reduction in the increase of standard of living by one-third. It wouldn’t be catastrophic; it just means standard of living doesn’t increase as much as it could. Think of the improvements in living people got from the internet, created for public use 30 years ago. “I just want people to think about whether they’re willing to give up all of this advancement that we’ve had over the last 30 years,” Farka said.

So economic growth is about more than economic gain.

Basically, capital and investment are the main ingredients in economic growth, said Charles Engel, a professor of economics at the University of Wisconsin-Madison.

But capital and investment can only take you so far. Simeon Alder, a visiting assistant professor of economics at the University of Wisconsin-Madison, said exponential economic growth requires exponential new ideas, as new ideas are the fundamental engine of growth. (Think about the economic growth and improvement in standards of living that occurred during and since the Industrial Revolution.)

“The challenge with that is the more ideas you already have, the more new ideas you need to create in order to sustain that growth rate,” he said. “To get these extra ideas, you just need more and more people as sort of a general result.”

Adler said there are two theories that explain how new ideas come about. The first is the “fishing out the pond” effect. Imagine a fishing expedition in a pond. At first, he explained, there are plentiful fish and they’re easy to catch. “But as you develop more and more knowledge, it gets harder and harder to catch yet another idea,” he said.

There is a countervailing force, called the “standing on the shoulders of giants” effect,” Adler said. This is where past advancements make future advancements possible.

“Going from the Stone Age to traveling to Mars — that’s a huge step. But if you figure out some early ideas, you figure out how to travel to the moon, then actually going to Mars is not such a crazy next step anymore,” Adler said.

If the “standing on the shoulders of giants” effect is strong enough, he said, there are models where economic growth does not rely on population growth. Adler said economists actually tried to figure out which effect is stronger in the real world, and while both are present, it seems we’re living more in a “fishing out the pond” world.

“It gets harder and harder to find new ideas, and you need more researchers and more bright minds to come up with new ideas that can fuel economic growth,” Adler said. “And in that kind of world, it does turn out that economic growth in the long run does actually require population growth.”

Wes Peterson, a professor of agricultural economics at the University of Nebraska-Lincoln, gives the example of GDP growth in the U.S. and in France. He said if you look at the two countries over the last 30 or 40 years, “the only reason that economic growth has been higher in the United States is because we have higher population growth than France does.”

So it seems that at this point, no, we cannot yet have sustainable economic growth without population growth.

Farka is more concerned about how a negative population growth rate could affect economic growth. For example, Japan has had a decline in the birth rate, had an increase in life expectancy and maintains pretty strict immigration policies. (Immigration is an important supplement to an economy with low birth rates.) This has led to a slowing growth in the country and is expected to seriously hinder future economic growth.

A decrease in population along with an increase in life expectancy means the proportion of people working decreases. A larger elderly population puts more strain on the economy because of the way most countries’ retirement systems are set up, White at NYU Stern said. For example, in the U.S., Social Security is a “pay as you go” system. Effectively, the current working population is making payments to those who are retired. It’s not sustainable when there are fewer working people contributing to the system and more retired people taking from it.

So, “we’re not about to do away with labor force growth,” Farka said. “In 100 or 200 years, I’ll have a different answer. Maybe by then, we’ll have such sophisticated robots and machines that would replace the rest of us that we could stay at home and write poetry and sing songs. But we’re not there yet.”