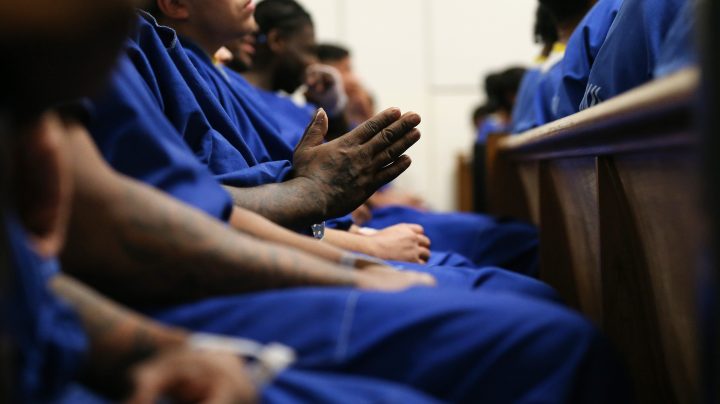 Last week, President Joe Biden directed the Justice Department to end its relationship with private prisons. In remarks before signing the executive order, he called it a first step in his administration’s plan to address “systemic problems in our criminal justice system.”

In a new book called “Halfway Home: Race, Punishment and the Afterlife of Mass Incarceration,” Reuben Jonathan Miller, an assistant professor of sociology at the Crown Family School of Social Work, Policy and Practice at the University of Chicago, explores the criminal justice system’s lingering effects on formerly incarcerated people and their families. Click the audio player above to hear Miller’s conversation with “Marketplace” host Kai Ryssdal. The following is an excerpt from the book.

I’d grown accustomed to the sounds of buzzers and gray steel doors shutting and locking behind me. It’s not like in the movies. The men who live there don’t flinch when the gates close. The smell of must, instant coffee, hastily brushed teeth, unwashed jumpsuits, and stomach flu tells you precisely where you are. But learning how to get around a place like this is an altogether different question. Underground passageways, some narrower and dingier than others, connect ten divisions sprawled across a ninety-six-acre compound. The campus feels stitched together. Red-brick, whitewashed, and gray stone buildings, each built at a different architectural moment, stretch up several stories before stretching out a full square mile; they’re connected by sidewalk trails, “the yard,” and hints of green space. Lines leading into the main dormitories wrap around the block-long brick-and-concrete walls that separate men and women in cages from their loved ones. The pace inside is slow but dizzying. A Frankenstein of a jail complex, Cook County is a patchwork of construction projects and racial politics lurching from the eighteenth century into the twenty-first.

In 1779, Chicago’s Black immigrant founder, trapper and fur trader Jean Baptiste Point du Sable, was arrested by the British under suspicion of “intercourse with the enemy.” He was Chicago’s first “permanent non-indigenous resident” — that is to say, he was the land’s first colonial settler. Du Sable must have stood out in a world of colonists at war with the “savages” and the elements and their own beasts of burden. And the colonists were at war with themselves — the French against the British and the British against the newly formed United States, asserting its right to be free. They warred over the right to take native lands, though all of them owned Black slaves. In the middle of the American Revolution, eighty-four years before the Great Emancipator ordered Black freedom in the rogue states, a free Haitian, son of a Frenchman and a formerly enslaved African woman, established a farm and trading post in the not yet settled marshland of Eschecagou (Chicago). Du Sable raised two “quadroon” children on the bank of the Chicago River with his Potawatomi wife, Kittahawa. In a sign of things to come, historians first encounter du Sable through the account of his jailer. Arent Schuyler de Peyster, the British commandant of Fort Michilimackinac, wrote that du Sable was a “handsome negro, (well-educated and settled in Eschecagou) but much in the French interest,” and that he sent him to Detroit, the coming symbol of American progress and decline. Du Sable would manage trade between the Brits, his captors; the French, who used to occupy that land; and the “Indians,” with whom he found family. Having built the first home and established the first trading post in what would become a global city, du Sable amassed some wealth. Yet he died like many formerly incarcerated Black men — penniless in his final years, his very American story almost lost to history.

Two centuries later, the psychologist Winston Moore, a “bear of a man” nicknamed “Buddha” by his colleagues, was appointed “America’s first Black Warden.” Presiding over the notorious and poorly run Cook County Jail, Moore was given the task of reforming and expanding it. He was a tough-on-crime kind of guy, working in the shadow of Nixon’s many wars — on hippies, on the poor, on drug addicts, on Black protesters mourning the murders of their leaders. Moore once penned an essay, published in Ebony, faulting Black people for their “extraordinary tolerance” of “the growing army of Black criminals.” The Black community, he wrote, needed “a massive re-education campaign” to “expose Black criminals for what they are, not heroes but deadly enemies.” Despite Moore’s law-and-order politics and identification with “hard working Black people” who just “wanted their ghettos back,” his tough demeanor backfired. Blamed for the jail’s many failures, including the escape of thirty-eight people, he was shamed, arrested, and fired from his job under allegations that he beat three prisoners, a political move that esteemed Black journalist Vernon Jarrett called the return of “dunk the darkie.” Moore was subjected to a very public trial and considerable public scorn. And while the charges were dropped, the damage had been done. The city founded by a Black “ex-convict” tried to convict its first Black jailer.

That Moore was tried in the courthouse he helped to fill reveals much about American so-called race relations and the uneven administration of what we’ve misrecognized as justice. The word justice suggests some harm repaired or some truth revealed, but 95 percent of all court cases end in a plea deal after a person has spent anywhere from several weeks to several years in a cage. Of the 2.3 million people who are incarcerated, 40 percent are Black, 84 percent are poor, and half have no income at all. The 2,626 people who have been exonerated since 1989 spent an average of nine years in prison for crimes they did not commit. Nearly half are Black, and almost all of them are poor. It is clear to anyone paying attention that the legal system does not administer anything resembling justice but instead manages the nation’s problemed populations.

This is the weight and history of punishment in the United States, which poor people encounter before their arrests. To live through mass incarceration is to take part in a lineage of control that can be traced from the slave ships, through the Jim Crow South, to the ghettos of the North, and to the many millions of almost-always-filled bunk beds in jails and prison cells that make the United States the world’s leading jailer.

Neither Moore nor du Sable fully rebounded from their encounters with the law. This is because a history of arrest, whether it leads to a conviction or not, whether the conviction is overturned or not, is just like any other history, especially those told inaccurately. It need not be well understood, or even true, to exercise power. The history of punishment and Black incarceration, of racism and the production of race, the whole history of crime and criminality haunt the people we’ve accused of crimes. It whispers into the ears of prospective employers and landlords, urging them to reject applications. And it whispers into the ears of grandmothers and girlfriends as they make life-or-death decisions on behalf of their loved ones, forcing them to withhold a couch to sleep on or risk eviction to help them because the state has labeled the people they care for most criminals. Mass incarceration has changed the social life of the city. It has filtered into the most intimate relationships and deformed the contours of American democracy, one poor (and most often) Black family at a time.