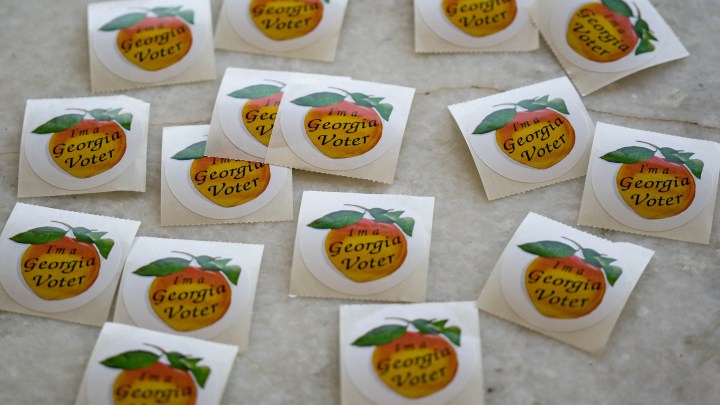 COPY
A pile of stickers for voters at Park Tavern on Nov. 3, 2020 in Atlanta, Georgia. Megan Varner/Getty Images
Elections 2020

A pile of stickers for voters at Park Tavern on Nov. 3, 2020 in Atlanta, Georgia. Megan Varner/Getty Images
Listen Now

Spending records could be broken in the race for the two U.S. Senate seats from Georgia that were too close to call on Nov. 3. Right now, millions of dollars are being spent on campaigning for runoff elections on Jan. 5. Incumbent Republican Sen. David Purdue faces Democrat Jon Ossoff. His Republican colleague, Sen. Kelly Loeffler, has a rematch with the Rev. Raphael Warnock, a Democrat.

One important voting bloc that can’t be reached so easily with pricey campaign ads? Teenagers, who need a little extra nudging to cast ballots.

Michael Giusto is doing some of that nudging. Giusto recently turned 18. Just a couple weeks ago he was too young to vote in the presidential election. But that didn’t stop him from co-founding Students for Tomorrow at his high school in the Atlanta suburbs. Their pitch? Vote if you want to change things.

“Students’ positions on a lot of topics like climate change, gun control and equality in general have been largely been ignored in government,” Giusto said.

Giusto said that to get out the vote, they’re relying on the most potent weapon in a teenagers’ arsenal: peer pressure. Giusto says he spends seven to eight hours a day sending out emails and talking on the phone. He can’t do much texting because his mom says it would get too expensive. Students for Tomorrow doesn’t have a budget.

Neither does Julia Geskey, a get-out-the vote campus organizer at Georgia State University with the Georgia Public Interest Research Group. “There is just people power,” she said.

Geskey and a team of student volunteers hit the phones the week before the Nov. 3 election. “We sent over 8,000 text messages, we called almost 3,000 people. We talked to 1,500 on the phone,” she said.

Looks like that worked. Twenty percent of Georgia voters in the presidential election were 18 to 29 years old, according to the Center for Information & Research on Civic Learning and Engagement, at Tufts University. That’s three percentage points higher than the national average. And there are around 23,000 Georgia teens who were too young to cast a ballot Nov. 3, but will turn 18 in time to vote on Jan. 5, 2021. They’re getting special attention from Geskey, who said her team is “educating them about everything, and giving them the resources they need to register and then also to vote.”

Meanwhile, the Democratic and Republican National Committees are spending big money to target the youth vote. They, too, are relying more on the phone.

“I mean, more phone banking than I think we’ve seen in previous years because so many people are at home,” said Georgia State University political science professor Amy Steigerwalt.

And if they don’t answer, Steigerwalt said, volunteers will knock on their doors. Wearing personal protective equipment, of course.