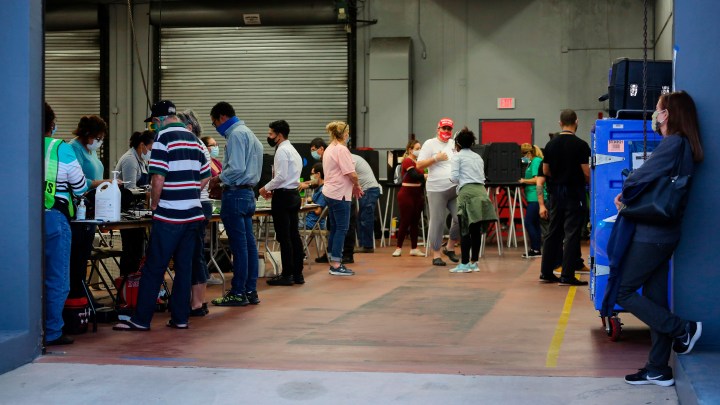 Alongside the uncertainty of the presidential race, there were actually some conclusive results Tuesday night. Florida, which President Trump won, approved Amendment 2 on the ballot, setting the state’s minimum wage at $15 an hour.

The amendment passed with a little more than 60% of the vote. It’s interesting to note because Republican politicians don’t usually support raising the minimum wage — federally or at the state level.

But when the issue is on the ballot, voters think otherwise.

Currently, Florida’s minimum wage is $8.56 an hour. This measure will nearly double that by 2026.

Ryan Feldman runs a coffee roasting business in southwest Florida where he employs 14 hourly workers. He voted in favor of the increase, but said it could eventually have direct consequences on his business.

“Down the pipeline, we’ll either need to kind of rejiggle our budget or we’ll have to kind of keep the payroll costs in line and potentially we’ll let one or two people go,” he said.

That’s exactly what opponents of Amendment 2 argued in Florida: that a wage raise would hurt small businesses, particularly those in the tourism industry, which is already struggling from the impacts of COVID-19. But Alexis Davis, policy analyst at the Florida Policy Institute, said this is just about getting more money into workers’ pockets.

“Businesses in the state have made billions on the tourism and service sector for decades long before this pandemic,” Davis said. “And it’s high time that they share the prosperity with the hardworking Floridians who made that happen.”

Florida is the eighth state that has approved a $15 minimum wage.

David Cooper, senior economic analyst at the Economic Policy Institute, said states are passing these measures because lawmakers in D.C. haven’t. The House passed a similar bill last year, but it didn’t go anywhere in the Senate.

“In the absence of federal legislation, it’s good that states are taking this up,” he said. “But I think, unfortunately, there are going to be many states that are probably not going to take up this issue unless they’re required to either by voters or by the federal government.”

The federal minimum wage is just $7.25 an hour.

The measure in Florida will increase wages for around 2.5 million people, or about 1 in 4 workers in the state.