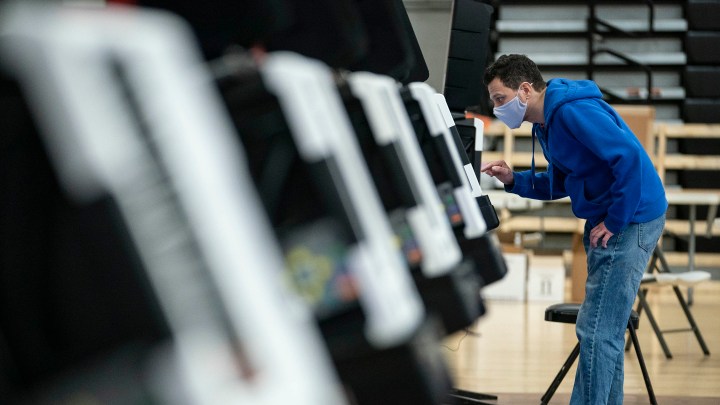 COPY
A man casts his ballot at an early voting center in Washington, D.C. Sarah Silbiger/Getty Images
Business of Voting

Here’s the latest from the Marketplace-Edison Research Poll: Confidence in the vote count for the presidential election reflects voters’ incomes. We asked respondents how confident they are that the votes in their states will be counted accurately. Nearly three-quarters of higher earners — those making more than $50,000 a year — are very or somewhat confident, compared to 64% of respondents below that income threshold. Confidence is even lower among respondents who said it would be very difficult to pay an unexpected $250 expense.

Tony Burditt, who lives just outside Houston, is a registered independent voter in that lower-income bracket. He told us he’s not confident his vote will be counted accurately.

“There are no minorities working the poll booths,” he said. “So it’s possible that they can cross out votes. If something is wrong — they can say it’s wrong, even if it’s not wrong.”

Burditt, who’s Black, also said those poll workers refused to let him vote without an ID in 2016, even though they’d gone to school with him for years. Burditt said he went home, got his ID, went back and got a very different reception: “They smiled at me and said, ‘Oh, hello Tony!’ “

“The experience of people with lower incomes is that the world is stacked against them more often,” he said.

Stewart said even a short trip to the polls on Election Day can reinforce that. Low-income voters might dodge potholes on the way to a run-down polling place and walk out with the familiar feeling that government is not on their side and won’t count their votes accurately, regardless of whom they’re voting for. Stewart said that’s “because you see other evidence of government perhaps not performing well.”

Stewart said President Donald Trump has “hitched his wagon” to these feelings to amplify doubts about the election. Ronald Backer, a Trump supporter responding to our poll in Modesto, California, said he’s not at all confident about the vote count.

“I think, yeah, there’s a good chance it could be rigged. Absolutely,” he said.

Backer also falls into that lower-income category. But Democrat Cynthia Ramos, a digital ad executive living just north of New York City, makes well above the $50,000 threshold. And she’s confident in her vote.

“I believe in our system,” she said. “People have been voting for years, and I believe that our voice will be heard.”

Ramos has already voted, by mail. She also believes in the Postal Service.