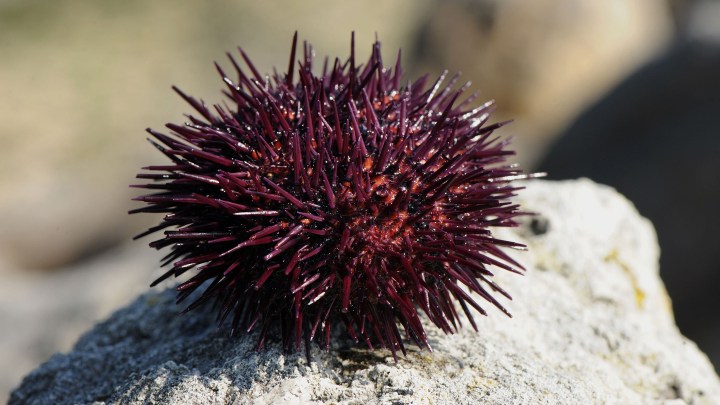 COPY
Oregon Sea Farms sells sea urchins for about $10 each. Above, a red sea urchin. Xavier Leoty/AFP via Getty Images

Wobbly blobs that look like grape jelly cling to the sides of seawater-filled tanks on the dock at Port Orford, Oregon.

These are purple sea urchins, and this is an urchin ranch. Inside the urchins is uni, a sushi delicacy.

Derrick Foley and his father are commercial divers who harvested these urchins. The elder Foley started his urchin diving business, Oregon Sea Farms, in 1993.

They usually sell urchins straight from the wild. Now, through a project funded by the nonprofit Oregon Wildlife Foundation, they’re fattening them up on the ranch first.

Foley said he can sell the urchins for about $10 each.

“They’re not gonna be cheap, that’s for sure,” he said.

And culling the urchins in the wild could also help kick-start kelp recovery.

Kelp is essential to Pacific coastal habitats. Sea urchin overpopulation has led to the decline of kelp.

“And you immediately can see a big difference between what a kelp forest habitat looks like and what rocky habitat without kelp looks like,” he said.

When the urchins reach market-size, chefs like Christian Gomez of Port Orford’s The Nest Cafe might add the locally ranched uni to sauces and spreads.

For Foley, keeping the kelp forest alive is essential to keeping his business alive. “I mean, that’s the primary food source for urchins,” he said.