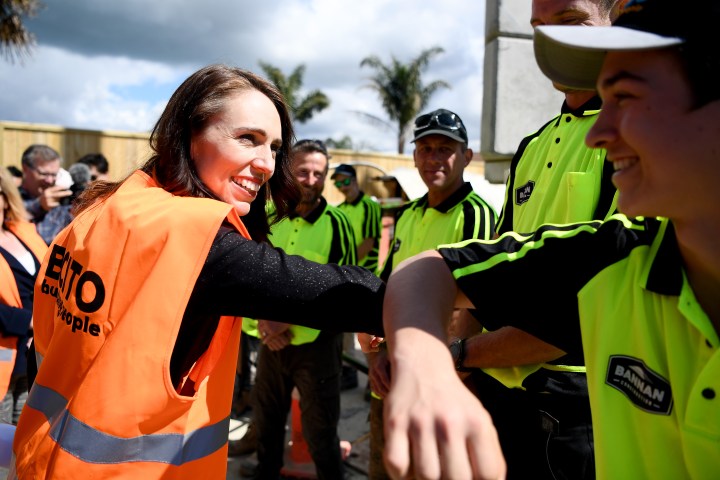 COPY
Women make up the large majority of people who lost their jobs due to coronavirus restrictions in New Zealand. Pictured: Prime Minister Jacinda Ardern on the campaign trail. Hannah Peters/Getty Images
COVID-19

Women make up the large majority of people who lost their jobs due to coronavirus restrictions in New Zealand. Pictured: Prime Minister Jacinda Ardern on the campaign trail. Hannah Peters/Getty Images
Listen Now

When Jacinda Ardern took office in New Zealand three years ago, she became the world’s youngest female head of government at the age of 37.

Now she’s up for reelection this weekend as voters go to the polls for what Ardern describes as a “COVID election.” Her campaign has centered on her government’s “go hard, go early” approach to the pandemic.

New Zealand has seen 25 deaths and fewer than 2,000 cases in a country of around 5 million people.

Not many world leaders have emerged with their reputations largely intact. But polls suggest Ardern’s has, and her Labour Party is ahead of its rival conservative National Party.

Still, the economy is weighing heavily on voters’ minds as they head to the ballot boxes. Unemployment has been rising and small businesses have struggled, even with the government’s wage subsidy schemes.

Shelley Sefton, who runs Diner 66 in Christchurch, said the schemes were insufficient to support restaurants like hers.

“I could certainly think of a lot better things for our business than Jacinda Ardern,” Sefton said.

She faced tight restrictions and no customers during the strictest period of lockdown. That didn’t make it easy to support her 20 staff members.

“I think we could have dealt with things in a different way to protect our elderly, at-risk people, without affecting the businesses quite so much, to the point where we needed that much wage subsidy,” Sefton said.

When it comes to building up cash reserves you need for a rainy day, she thinks many people don’t really understand how difficult that is.

“They think if you own a business you must have money, so you should be able to suck it up,” she said.

Across New Zealand, women have been hit disproportionately by economic hardship during the pandemic. Of the 11,000 unemployed in the second quarter, 10,000 were women.

Jennifer Curtin, a political science professor at the University of Auckland, said that’s because the government’s economic recovery package was too “old school.”

“So they decided that they would invest in construction and physical infrastructure, rebuild roads, rail and trades apprenticeships. And that part of the economy, it’s very male dominated,” Curtin said.

Curtin said that’s because there was considerably less investment in supporting personal care industry workers like hairdressers, beauticians and domestic cleaners, who are more traditionally women.

Whoever leads the next government will have to “rethink or be a little more imaginative about how women’s jobs and women’s livelihoods can be looked after during the post-COVID recovery period,” Curtin said.

Even before polls open on Saturday, it’s expected more than half of all votes will have already been cast. That’s because, like in many parts of the U.S., advance voting has been extended this time around. An indication of the results may come within minutes of polls closing on Saturday evening.