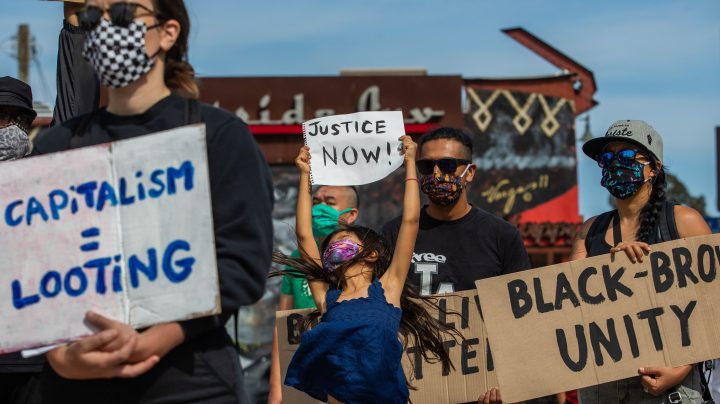 Protesters in Los Angeles in May 2020. Apu Gomes/AFP via Getty Images

As a Black woman and the child of immigrants, Zainab Giwa has felt for a long time like the economic system in the U.S. is rigged.

“It’s not built for people like me,” said Giwa, 29, who lives in Providence, Rhode Island. “I think my name is a barrier. I think the fact that I don’t have generational wealth to rely on so that I can take some lower paying jobs with some level of cushion… knowing that I can fall back on something is a reason why I say that.”

More than 80% of Black people feel similarly — that the economy is rigged in favor of certain groups, according to the latest Marketplace-Edison Poll. So do about 70% of women, and nearly two thirds of all Americans.

“I’m not surprised that folks think that, and I think that they are right,” said Janelle Jones, managing director of policy and research at Groundwork Collaborative, a progressive economic think tank. “It is rigged towards the wealthy, towards the powerful, often towards white people. And so I think that means that we have an economy that is fundamentally not working for most people.”

Just 35% of Americans said that they feel completely financially secure, the Marketplace-Edison Poll found. Nearly 20% have missed a rent payment in the last six months, nearly half said it would be hard for them to pay an unexpected $250 expense, and almost 70% were at least a little afraid they won’t have enough saved for retirement. In every instance, the percentages were higher for those who are Black and Hispanic or Latinx than those who are white, and higher for women than men.

“Most people see themselves as being in the situation where they’re just scraping by,” said Dean Baker, a senior economist at the Center for Economic and Policy Research. “And then of course they see — it’s impossible to avoid — you have these people who are doing very, very well, with luxury homes, expensive cars, flying all over the world. I think there’s a sense that, okay, this didn’t just happen, it wasn’t just that they worked hard, they’re clever, had good luck. Things were really rigged.”

Amie Jones, 52, felt that innately for most of her life. As she’s gotten older, she’s read and learned a lot more about how the economy works, which has only solidified those feelings.

She has seen it in the numbers — like the unemployment rate, which is often twice as high for Black people as for white people, and the wealth gap, where the net worth of the average white family is ten times that of the average Black family. And she has felt it in her own life, when she couldn’t afford to go to college, when she could only get high-interest loans, when she’s watched men frequently get promoted and paid more than women at work.

None of this is new, and a significant percentage of Americans have felt the economy is rigged for years. Before the 2016 election, though, roughly 60% of both Clinton and Trump supporters saw the economy as rigged; today, 86% of Biden supporters say it’s rigged, compared to just 33% of Trump voters.

Eliouse Wesley, 60, has always felt the economy is rigged “for white folks and against minorities in general,” he said; that it’s harder for Black people, in particular, to get the same kinds of jobs and opportunities as white people.

But in the last few years, “under Trump, nobody has a break as far as I’m concerned… all he cares about is the 1%,” said Wesley, who’s Black and lives in Brooklyn, New York. “It’s not even a Black and white thing after awhile anymore, now it’s either money or no money. If you got money you can live, if you don’t then you gotta scuffle.”

Juan Vega, 60, has felt the balance tilt, too, in recent years, away from the little guy.

“For me it’s very clear, what I see in my community,” said Vega, who is Hispanic/Latinx and lives in Fort Pierce, Florida. “A lot of small businesses are going out of business because big corporations like Amazon are taking a big chunk of the pie.”

And, he says, not paying their fair share in taxes.

“The government treats the big guys like the favorite kid,” he said. “People like me, it’s crazy because we have to pay taxes without any break. We have to pay and pay and pay… and the people with millions, they pay a little or nothing at all. That’s crazy.”

Vega also feels like it’s been harder for his kids, who are in their 20s and 30s, to find good jobs and get ahead economically than it was for him. Any number of metrics show that’s the case for many millennials — they are making less, have more debt, and are less likely to own a home than their parents and grandparents.

In Peter Selover’s mind, the minimum wage is “one of the largest determining factors in the inability of large chunks of Americans, Black and white, male and female, to move forward in this country.”

Selover is white and lives in Shaker Heights, Ohio, and for much of his life he’s worked as a nanny, or in other low-paying jobs. When he was younger, it felt possible to find a minimum wage job, work hard, get periodic raises, and get ahead. Not anymore.

Today, someone working full time at a minimum wage job cannot afford rent on an average one-bedroom apartment almost anywhere in the country. And the majority of those in low-wage jobs are Black, Hispanic or Latinx and women.

“There’s no ability to advance, regardless of how much you’re applying yourself and how hard you’re working,” said Selover, 59. “You’ve got people who’ve been in the same position for a decade still making minimum wage sometimes, and you can never get ahead with that. Never. You can do everything right, you can’t move forward. And that’s rigged.”

“Just think about what society would look like if your lowest paid worker was earning $48,000 a year, or a two minimum wage earner couple was getting $96,000 a year,” he said. “That would be a radically different world.”

For Janelle Jones, nothing illustrates the meaning of a rigged economy quite like the news of the last six or seven months.

“These dueling headlines of, like, ‘stock market reaches new highs,’ ‘40 million Americans unemployed,’” she said. “That’s what it means to me. It means that at a time when millions of people are losing their jobs, the stock market is soaring and people are saying the economy is rebounding.”