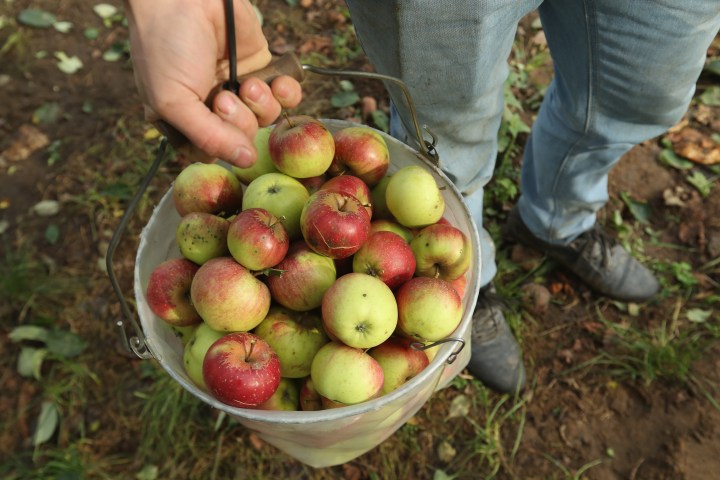 Fall is by far the busiest time of year for Al Rose’s business, Red Apple Farm in Phillipston, Massachusetts. “When it comes to fall, especially in New England, everyone identifies with that rite to passage of going apple-picking or having hot cider doughnuts,” Rose said. He wasn’t sure what demand would look like this year because of coronavirus.

“Looking out ahead of the fall, being that is our lion’s share of our income, we were quickly trying to figure out what other adaptations we had to make,” he said. He rented four hand-washing sinks to put around the farm and created an online reservation system for people to reserve times to pick apples, pumpkins and other produce.

“The demand has been kind of through the roof, it’s been unprecedented,” Rose said. “We weren’t expecting the same business in the fall, but the demand from Labor Day weekend was huge, probably 50% higher.”

In addition to pick-your-own apples, Red Apple Farm has offered dig-your-own potatoes for around 20 years, Rose said. Usually, it was mostly school groups on field trips that participated. But this year, Rose said people were “ecstatic” about it.

“We had well over 500 people dig [their] own potatoes this year,” he said. “We know next year we’re gonna have to double our potato field.”

Despite the demand for pick-your-own this year, Red Apple Farm has faced some negative consequences from the pandemic. They had to refund some customers who had scheduled weddings on the farm, and aren’t doing the usual hayrides this season. However, Rose is optimistic about how this year is turning out.

“This happened in 2001, with 9/11. We had a lot of people that came to the farm,” he said. “People needed to connect with something that was tangible, and there was a security and authenticity of being at a farm. We’re seeing that this year with COVID as well. The farm really resonates with people.”