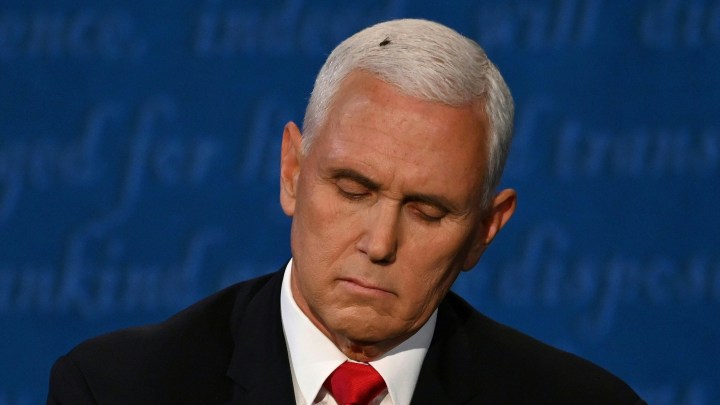 Last night, during the vice presidential debate, a black fly landed on Vice President Mike Pence’s white hair and stayed there for two minutes and three seconds. Yeah, of course some folks timed it.

It did not take long for several fake Twitter profiles from the fly’s perspective to appear. And then, about half an hour after the debate ended, the Biden campaign was already selling fly swatters with the campaign logo and the words “Truth over Flies.”

A staffer told Mashable today that the campaign had sold 35,000 of them.

But a fly swatter is a very specific piece of campaign merch. The Biden campaign certainly didn’t just have these sitting around. So how did it turn these around so quickly?

“Truthfully, they haven’t turned one single flyswatter around. They’ve taken a picture of the fly swatter. They’ve placed the graphic on it and they’ve posted the picture,” said Kerri Kleiner, who owns a company called Quench Promo. It distributes promotional products like T-shirts, hats and beer koozies.

“I’m going to say the whoopee cushion was probably my weirdest one, which I did recently for a comedian,” Kleiner said.

Full disclosure: Her company has worked with Marketplace on its marketing campaigns.

Companies like Quench Promo have an army of suppliers.

“We’ve got suppliers that have fly swatters,” she said. “There’s at least one or two that I can think of.”

So imagine this: The Biden team is watching the debate, they see the fly and the internet’s reaction, they put up the product listing and at the same time, and reach out to whatever company they’re working with to get the actual swatters made.

We think this is roughly how it worked. The Biden campaign didn’t respond to our request for comment. But the campaign’s merch website says it’s run by a custom print shop in Austin, Texas.

The swatters are a way to engage supporters — and to raise money, said Ciara Torres-Spelliscy, a professor at Stetson University College of Law who wrote a book on political branding.

“Every time that you can sell a fly swatter for more than the fly swatter costs, that is money in the pocket of the Biden campaign,” she said. “And it means that they can spend more on get out the vote, messaging to voters, ads on TV.”

She said President Donald Trump’s campaign did this effectively in 2016 with its Make America Great Again hats.

Matthew Kelly, a Biden supporter in Philadelphia who ordered a fly swatter last night, notes that it is kind of a risky purchase. It could take a while for the swatter to arrive.

“I wouldn’t be shocked if I don’t get it until after the election,” he said. “So I hope it’s not a really grim reminder of like that time we all got excited about a flyswatter before Biden lost an election or something.”

Ideally, he’d like to keep it around for a few years.