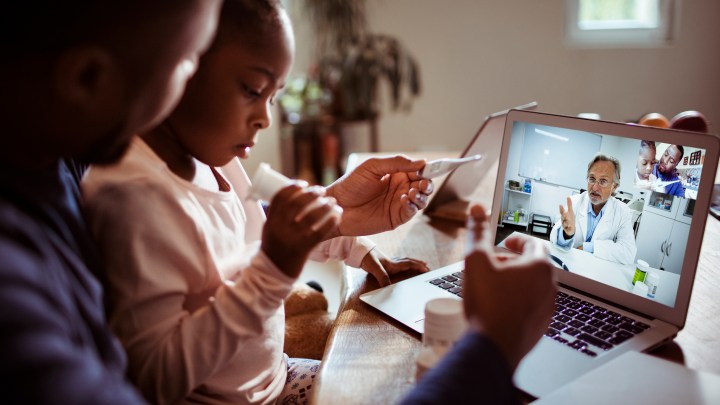 COPY
Copays for virtual doctor appointments that were waived at the beginning of the pandemic are coming back. Geber86/Getty Images
COVID-19

Copays for virtual doctor appointments that were waived at the beginning of the pandemic are coming back. Geber86/Getty Images
Listen Now

At the beginning of this pandemic, many insurance companies started waiving copays for telehealth visits to encourage people to stay home and to reduce stress on hospitals and health care facilities. And it worked: Telehealth visits rose more than 13% at their peak this summer.

Now, some major health insurers, including UnitedHealthcare and Anthem, are reversing course and will start charging fees starting Oct. 1. It means the cost of seeing a doctor virtually could be the same as the cost of going in person.

But not all patients view online and in-person care as equal. It’s why Dr. Chad Ellimoottil still dresses up for work, even on days when all his appointments are virtual.

“The video takes a little formality out of it, so I kind of raise the formality by wearing a white coat,” he said Ellimoottil, a urologist who directs the University of Michigan Institute for Healthcare Policy and Innovation’s Telehealth Research Incubator.

Dressing the part is important because he wants patients to know they’re getting the same treatment online as they would in person. And Reintroducing copays could make them scrutinize virtual visits even more.

“There’s no doubt that it will leave some people less interested in doing a video consultation,” he said.

And that’s really part of the point, to push patients back to seeing a doctor in person. Because people have been putting off important exams and procedures that couldn’t be done virtually.

“That led to a lot of morbidity and mortality at home because they were so scared to get care,” said Ateev Mehrotra, a professor of health care policy at Harvard Medical School. He said during the pandemic, in-patient care has dropped by 60%.

Insurance companies might also be worried that no copays meant too many people were making virtual appointments for fairly minor complaints.

But she said copays, which can cost as much as $100, can discourage people from getting necessary medical help. And reintroducing them will force some people to go back to weighing what’s more important: putting dinner on the table or seeing a doctor.