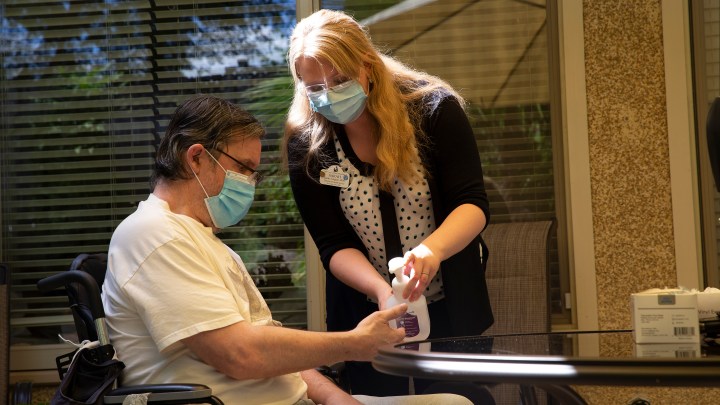 COPY
About half of Americans turning 65 these days will need some kind of long-term care and support services before they die. Karen Ducey/Getty Images

About half of Americans turning 65 these days will need some kind of long-term care and support services before they die. Karen Ducey/Getty Images
Listen Now

Older people continue to face the risk that they’ll end up with no way to pay for long-term care. Led by the Treasury Department, the government recently released the results of a two-year study on long-term care insurance.

Marketplace senior economics contributor Chris Farrell monitors issues affecting seniors, and he took a closer look at this report. The following is an edited transcript of his conversation with “Marketplace Morning Report” host David Brancaccio.

David Brancaccio: So this report was about fixing how we pay for long-term care.

Chris Farrell: Right. And it focused on the private insurance market. And I have to tell you, David, I had really high hopes. I mean, a two-year study. And I just thought that this task force, they need to take a bold stand for comprehensive reform. But really, when you read through the report, it only calls for modest tweaks to the private long-term care insurance market. And I just want to give you one sort of simple way to highlight why this topic is so important. About half of Americans turning 65, the day that they listen to this broadcast, will need some kind of long-term care and support services before they die

Brancaccio: Now, I mean, what are we talking about here? Let’s define the term.

Farrell: Long-term care is this catchphrase, and it’s for a variety of support services older individuals might need later in life, just to do their daily activities. You know, think eating, bathing, dressing, paying the bills, managing money, going shopping. And I do want to emphasize, this is really important, that the average need for long-term care, it covers a wide variety of experiences, ranging from minimal help to go run some errands to intensive care for those with dementia.

Brancaccio: Dare I even open up this can of worms: How do we pay now?

Farrell: It’s a complicated topic, but, in very broad strokes, most of the services aren’t covered by Medicare. And Medicaid, that’s the joint federal-state health insurance program, it’s the public long-term care option. But here’s the thing: qualifying for [Medicaid], you have to be impoverished first. So families are bearing most of the costs associated with taking care of their aging parents and their relatives. And, meanwhile, this private long-term care insurance market has shrunk over the past two decades.

Brancaccio: Well, it’s not because there’s not demand, right?

Farrell: No, there is demand. But here’s the thing: the premiums are too high, the policies are too complicated and the coverage options have shrunk in recent decades. Now, on the insurance side, they have lost bundles of money underestimating the amount of care that they were on the hook for. So if we went back 20 years, from over 100 companies, you’re now down to about a dozen.