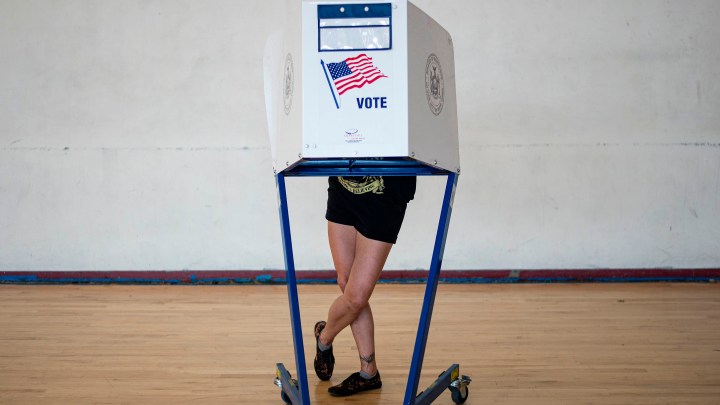 COPY
Of course, all forecasting models have their limits, because the data just provides a snapshot in time. Johannes Eisele/AFP via Getty Images
Elections 2020

Of course, all forecasting models have their limits, because the data just provides a snapshot in time. Johannes Eisele/AFP via Getty Images
Listen Now

Wednesday morning, The Economist rolled out two new election forecasting models to try to predict who, and which parties, are likely to win in this year’s House and Senate races. The models use machine-learning algorithms to parse a variety of data.

The Economist’s model takes in election data going back to 1942 and considers factors such as a district’s voting history, polls and fundraising.

Data editor Dan Rosenheck with The Economist said the model also responds to new data as it comes in.

“It will continue to change, every day, up until the election, depending on what the polls say, how the fundraising data comes in,” Rosenheck said.

Those kinds of predictions can be valuable for candidates and their parties as they decide how to spend their money, said political science professor Costas Panagopoulos at Northeastern University.

“Particularly if you’re a national party, looking at these forecasting models to figure out where to allocate resources and who needs more funds,” Panagopoulos said.

But forecasting models have their limits, Panagopoulos said, because the data just provides a snapshot in time.

“Any prediction is only as good as the data that’s fed into that forecasting model. And sometimes, you know, they’re wrong,” he said.

Panagopoulos said models like these can get more accurate closer to the election as many voters make up their minds.