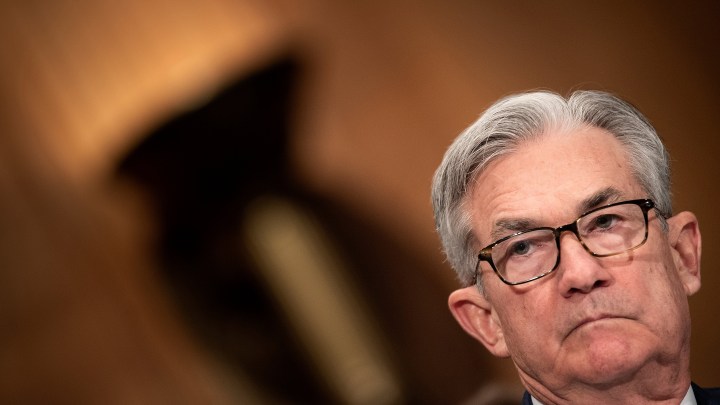 America’s central banker in chief offered a dreary assessment of the economy after his policymaking team’s last interest rate meeting before the election. The outlook is “highly uncertain,” given the pandemic. Jerome Powell left the world the strong impression that interest rates will stay near zero until 2023.

But Powell also made it clear there are things the Fed can’t do. Marketplace’s Nancy Marshall-Genzer was on the video briefing Wednesday. The following is an edited transcript of her conversation with “Marketplace Morning Report” host David Brancaccio.

David Brancaccio: What can’t the Fed do?

Nancy Marshall-Genzer: Powell made it clear the Fed only has the power to lend money. It can’t make grants. That’s Congress’ job.

Jerome Powell: These are lending powers, not spending powers. The Fed cannot grant money to particular beneficiaries. We can only create programs or facilities with broad-based eligibility to make loans to solvent entities with the expectation that the loans will be repaid.

Marshall-Genzer: Powell said another relief package from Congress will likely be needed. He pointed out that roughly 11 million people are still out of work due to the pandemic.

Brancaccio: And this is the first Fed meeting since Powell unveiled a new policy on letting inflation run hotter before intervening?

Marshall-Genzer: It is. The new policy is that the Fed will aim for inflation to come in at an average of 2%, letting it go a bit higher if it’s been below that for a while, and even if unemployment is low. The Fed used to raise rates to head off inflation right away when the jobless rate fell. The thinking was workers could demand higher salaries, pushing up prices. But now the Fed will sit tight, because it takes longer for the Black and Hispanic jobless rates to come down. The idea is, give everybody a chance to find a job, without worrying so much about the economy heating up.

Brancaccio: And what did Powell say about income inequality?

Marshall-Genzer: He was asked about it a couple of times – I asked him about it. He said economic inequality holds back the economy. Powell said people are stuck at the lower end of the income spectrum. And they have limited mobility, so they can’t move for jobs. But Powell said there’s only so much the Fed can do about these problems.

Powell: We don’t really have the tools to address those. We have interest rates and bank supervision and financial stability policy and things like that, but we can’t get at those things through our tools.

Marshall-Genzer: Powell said, ultimately, these are issues for elected representatives.