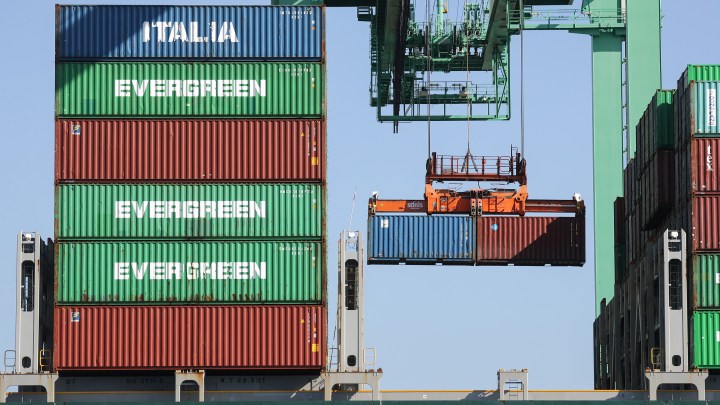 COPY
Containers are offloaded at the Port of Los Angeles, the nation's busiest port which was relatively quiet during the early months of the pandemic. Mario Tama/Getty Images
COVID-19

Containers are offloaded at the Port of Los Angeles, the nation's busiest port which was relatively quiet during the early months of the pandemic. Mario Tama/Getty Images
Listen Now

The pandemic and trade tensions slowed global trade to a crawl earlier this year. So it may be kind of surprising to learn that in the last few months, imports to the U.S. have been surging. A report out today from the National Retail Federation states import volumes may have hit record levels in August.

This year, the Port of Los Angeles went from handling the lowest container volumes it had seen in over a decade to taking in near-record levels of imports.

“August will be one of the best months we’ve had in our port’s history,” said Gene Seroka, the port’s executive director. “And September, right now, is looking to be looking very strong as well, from our forward indications.”

That’s because supply chains have started to come back. Big-box retailers are restocking shelves. Plus online shopping jumped over 30% in the second quarter.

“So those inventories have to be replenished,” Seroka said.

People have also been buying a lot of bulky items to set up home offices — desks, chairs and computer monitors. And that filled a lot of shipping containers, too.

Jonathan Gold follows supply chain policy for the National Retail Federation. He said this is also the time of year when retailers start preparing for the holiday season, when, during normal times, we buy each other a lot of stuff.

But these are not normal times.

Dale Rogers, a professor of supply chain management at Arizona State University, said by building up their inventories, stores are betting that the consumer will feel comfortable buying things this holiday season.

“There’s a belief that the consumer is going to be there, ” Rogers said. “But they’re not necessarily there yet.”

Still, consumers have fewer ways to spend their money this year. Travel is still difficult, and restaurants have limited capacity.

Eswar Prasad, a professor of trade policy at Cornell University, said for those who have a holiday budget, “people have to spend their money on something.”

Prasad said when we can’t spend much on experiences and other services, we’re likely to spend more on goods.