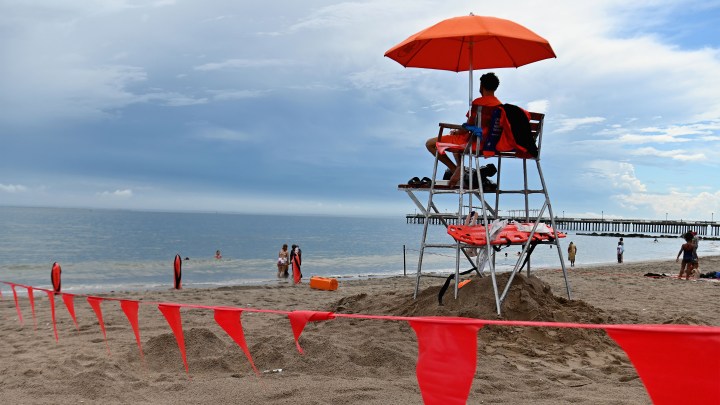 COPY
This week, the Bureau of Labor Statistics changed its methodology in adjusting for seasonal jobs, like that of a lifeguard. It makes the data more accurate, but also more confusing. Angela Weiss/AFP via Getty Images
COVID & Unemployment

This week, the Bureau of Labor Statistics changed its methodology in adjusting for seasonal jobs, like that of a lifeguard. It makes the data more accurate, but also more confusing. Angela Weiss/AFP via Getty Images
Listen Now

This morning we had what seemed — at first — to be pretty darn good news.

The Labor Department reported first-time unemployment claims, seasonally adjusted, were down by 130,000 last week to 881,000. That’s the lowest number of initial claims since the huge spike in layoffs started back in mid-March and is under a million for only the second time since then.

For this week’s numbers, for the first time, the Labor Department adjusted its seasonal adjustment. That makes the data more accurate, but also more confusing.

First, what’s the point of a seasonal adjustment?

“Economists use seasonal adjustments to smooth out seasonal patterns to get a better read of the underlying trends in the labor market,” said Heidi Shierholz, who was chief economist at the Labor Department during the Obama administration.

“Every year in January, 100,000 extra people apply for unemployment insurance claims, because they lost temporary holiday jobs,” Shierholz said. “You wouldn’t want economists to say, ‘Ah, things in the economy are really deteriorating’ when they’re not, it was just a normal seasonal pattern.”

So the statisticians at the Labor Department apply seasonal adjustment formulas to reveal the underlying trends.

But a pandemic with more than 20 million layoffs over a few weeks is pretty unprecedented. And the traditional methodology for seasonal adjustment of the data “has been messed up,” Shierholz said.

So the Bureau of Labor Statistics stepped up to fix the methodology. Joseph Brusuelas at RSM, a consulting company, explains: “They went from what we call the ‘multiplicative’ to an ‘additive’ seasonal adjustment — and I’ll stop there before I put everybody to sleep.”

But BLS didn’t apply the fix retroactively to previous weeks. Meaning, we don’t really know if claims just fell by 130,000. It’s like comparing apples and oranges.

Brusuelas said there’s a better number to follow right now: the total number of workers getting an unemployment check every week. That’s around 29 million, and it’s gradually been coming down.