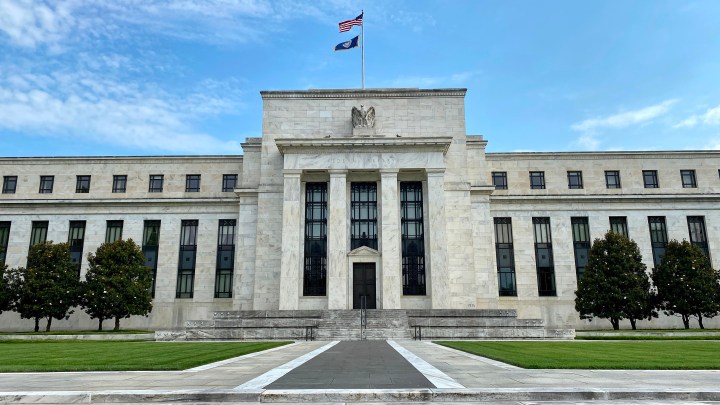 Low interest rates have helped prop up the stock market. They make mortgages and credit cards cheaper. But the Federal Reserve’s renewed commitment as of last week to lower interest rates for longer has a flip side.

People living off their savings, which include many older people, suffer when savings and bond rates stay low. Some analysts have likened low interest rates to a huge tax — you could have earned 4%, how do you feel about less than 1%?

Karen Petrou, managing partner at Federal Financial Analytics, spoke with “Marketplace Morning Report” host David Brancaccio, and the following is an edited transcript of their conversation.

David Brancaccio: Well, there’s a crisis right now, and lower interest rates can help stimulate the economy now. But going forward, this notion of, the ocean in which we swim will be lower interest rates until perhaps we die — that changes a lot of things. Especially if you had accumulated something and you had hoped to live off what you accumulated in your retirement.

Karen Petrou: You’re right, David, savings won’t work. Speculation works. Why is the market going up so fast and so high when the economy is reaching crisis points we haven’t seen since the 1930s? And the answer is, that’s what ultra low rates do. Anyone hoping to have funds for a down payment, for child’s education, let alone for retirement, cannot save. You lose money saving.

Brancaccio: Now in June, our central banking friends were talking a lot about dealing with economic inequality in America, but very low interest rates for the foreseeable future plays out in this debate. You think it could enhance inequality?

Petrou: I think it’ll make it a lot worse. The Fed’s approach to thinking about economic inequality is to start looking at employment-based — not just on aggregate and average numbers, but also to look at it based on demographic groups, especially looking at Black inequality. And that’s fine, but it’s not enough. We don’t need more numbers. We need ways for lower-income people to earn living returns and living wages. And this economy, since 2010, hasn’t done that.

Petrou: Fundamentally, monetary policy, since 2010, led to the slowest economic “recovery” in decades with far worse economic inequality and much greater risk taking in financial markets. And I don’t see any reasons why this new “robust” updating, as the Fed calls it, will do anything but make that worse. We don’t see where the sources of capital investment, long-term productivity and real strength for small businesses — where’s that going to come from? There’s nothing in this policy for shared prosperity. I don’t see it.