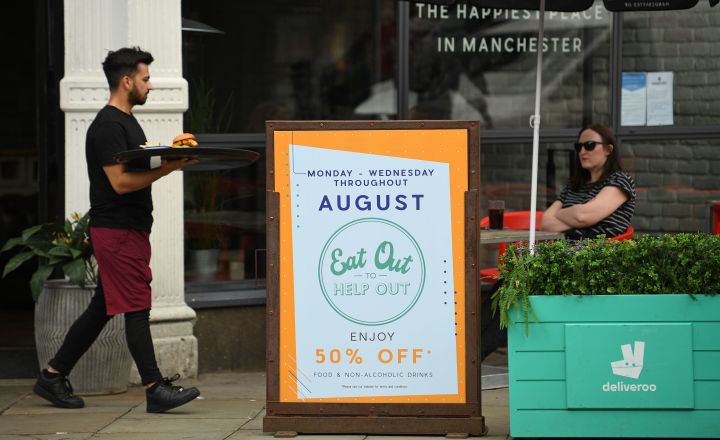 COPY
A server carries food past a sign promoting the British government's "Eat Out to Help Out" scheme to get consumers spending again. Oli Scarff/AFP via Getty Images
COVID-19

A server carries food past a sign promoting the British government's "Eat Out to Help Out" scheme to get consumers spending again. Oli Scarff/AFP via Getty Images
Listen Now

Britain’s hospitality industry is humming back to life.

Take a walk down any street early in the week and you’ll find diners spilling out of open doors and into bike lanes now designated for tables and chairs. The sudden boom is thanks to a government program called “Eat Out to Help Out.”

It runs Mondays to Wednesdays at any of the 85,000 participating restaurants during August, and covers half a diner’s bill, up to $13.

The program aims to reinvigorate the nation’s hospitality sector, which has been battered by the COVID-19 crisis. Government data shows nearly 80% of businesses in the industry closed in April after the country went on lockdown, and 1.4 million British workers were furloughed.

But in the two weeks since the Eat Out to Help Out scheme was launched, restaurants have been 27% fuller than they were during the same period last year, according to OpenTable data.

“We’re doing significantly better than we would be otherwise,” he said. “I couldn’t have imagined a better scheme to help get everyone back and enthusiastic about going out again. It’s been so successful that everyone is lobbying for it to be extended until September.”

The U.K. government says, so far, more than 35 million discounted meals have been claimed, putting more than $236 million back into the restaurants that served them.

White said because people are dining out early in the week, Thursdays and Fridays, peak days before the pandemic, are now much quieter. But, he suggests, overall sales are enough to fight off the effect of the slowdown in the first half of the year.

Indeed, data from Springboard, which tracks retail traffic, showed that between Aug. 2 and Aug. 8, traffic across retail destinations all around the country jumped nearly 19% after 6 p.m., and nearly 10% at lunchtime.

People are clearly hungry for the discount, but can the U.K. really eat its way to economic recovery?

Kate Smith, associate director at the Institute for Fiscal Studies, isn’t quite so sure. She said an important consideration is whether it acts more as a benefit to people who would have eaten out even without the discount.

“If you’re a family that’s really struggling to put food on the table, you’re probably not going to be eating out. So, this is probably a scheme that’s going to be benefiting people in middle or higher incomes,” she said.

What’s more, it comes with a hefty price tag for the government, which announced on Friday public debt surpassed $2.5 trillion for the first time.

The Eat Out to Help Out scheme is just one component of the U.K. government’s plan to assist its beleaguered economy. Other measures include a plan to cut value-added tax for the tourism and hospitality industry by 15%, a “kick-start scheme” totaling $2.6 billion to create jobs for young and long-term unemployed workers and a nearly $10 billion investment in new infrastructure projects.

“All countries are going to be grappling with the fact that debt and borrowing are at high levels,” Smith said. “We have had to do that to avoid an even worse economic situation. At some point, we’re going to have to pay for that. And that’s going to come through either higher taxes or lower spending on public services. Those decisions won’t necessarily be easy.”

The U.K.’s approach with the dining-out program is a unique one. Contrasted with the U.S. decision to give qualifying recipients a stimulus check, which they could either spend, save, or invest, the British program forces money back into the economy by encouraging people to eat out with a discount.

“You want to target these packages in the areas they’re going to have the most benefit. If we can encourage people to spend and get that money into the economy now, that’s good,” Smith said. “But, also, we want to think about providing support to people who are struggling because of job cuts and wage cuts.” Smith adds that one benefit of the U.S. system is that people who need to spend money on groceries or rent can do that.

The hospitality sector could be key to the country’s jobs recovery. Following the 2008 financial crisis, the sector generated 22% of all new jobs between 2010-2011, despite accounting for just 10% of the U.K.’s overall employment, according to data compiled by the Resolution Foundation think tank. 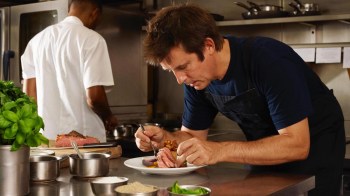 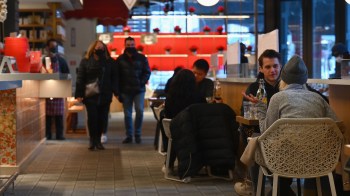