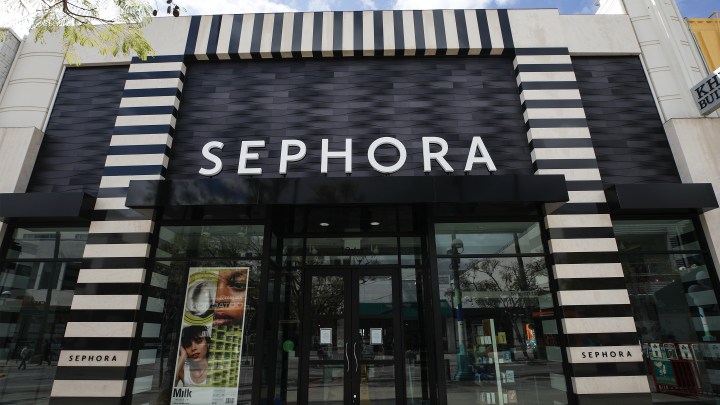 COPY
A Sephora store in Santa Monica, California, in March. The beauty chain is participating in the 15 Percent Pledge. Mario Tama/Getty Images
Race and Economy

A Sephora store in Santa Monica, California, in March. The beauty chain is participating in the 15 Percent Pledge. Mario Tama/Getty Images
Listen Now

The 15 Percent Pledge was born of frustration. In the days after the police killing of George Floyd, “I was seeing all of these emails and posts on Instagram from these businesses that said, ‘We stand with you and we support you,’ ” said Aurora James, founder of the shoe and handbag company Brother Vellies. “And as a Black woman and a Black entrepreneur, I really wasn’t feeling like they were standing with me or supporting me.”

Nearly 15% of the U.S. population is Black, James said. So if businesses truly wanted to support the Black community, they would pledge 15% of their shelf space to Black-owned businesses.

She quickly started a 15 Percent Pledge website and created a nonprofit. And companies started to sign on.

First, figure out what percentage of your products is made by Black-owned businesses.

Second, figure out how you got there. Like maybe you’re not giving your buyers incentives to seek out different brands.

“Maybe people have spent so much time buying Michael Kors, there’s like no space to, you know, try buying a Christopher John Rogers or you know, another Black-owned brand,” she said.

“The people that are buying beauty, they are diverse, and they deserve to be buying products from founders that look like them and have the same beauty needs,” said Artemis Patrick, an executive at Sephora.

The company has found that only seven of the 290 brands it sells are Black-owned.

“We will be providing connections to and support from funders, so that these companies have the financial resources they need and unfortunately often don’t have access to,” she said.

James said retailers could also give deposits to small business owners upfront so they can make the products.

A few other companies have signed onto the pledge: West Elm, Rent the Runway and the cannabis dispensary MedMen.

And James said there’s a business case for more retailers to do the same. Shoppers are paying attention.

“I as a Black woman know that I’m no longer comfortable shopping at retailers that aren’t committing to my community,” James said.