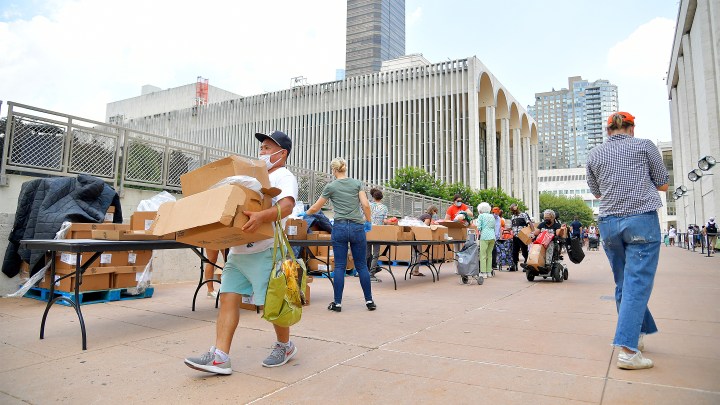 COPY
A food distribution event for people in need of food in New York in July. Michael Loccisano/Getty Images
COVID-19

A food distribution event for people in need of food in New York in July. Michael Loccisano/Getty Images
Listen Now

Tens of millions of Americans are facing unemployment and struggling to pay for essentials like rent or food. As a result, Feeding America, the nation’s largest hunger-relief organization, is facing unprecedented demand. Marketplace host Kai Ryssdal checked in with Claire Babineaux-Fontenot, the organization’s CEO. When they last spoke, in April, she said Feeding America needed more help or things could become “truly critical.”

Kai Ryssdal: We spoke to you a number of months ago as this thing was just starting, and you were busy. I imagine 5½-something months into this, you are now busier still.

Claire Babineaux-Fontenot: Ah, this is true. Unfortunately, there continues to be a whole lot of need out there. There is definitely a food crisis that has come along with the health crisis.

Ryssdal: Do you have what you need? Do you have volunteers? We talked about that last time. Do you have food supply that you can distribute?

Babineaux-Fontenot: Well, maybe the best way to respond to that question, I guess the short answer, is not everything that we need. So in normal times, we provide meals and other services for people facing hunger to the tune of about 40 million people. Since this pandemic, our estimates are that the number of food-insecure people in the country are going to hopefully peak at 54 million people across the U.S. who will be food-insecure. So we’re seeing significant increases in demand. And we’re continuing to have some pressure in terms of supply. So we just completed a study, and what we were able to determine is we project that over the course of the next 12 months, there’s going to be a gap of about 8 billion meals. That includes all of the interventions we’ve already had. And we simply can’t do this alone.

Ryssdal: Those numbers are stunning — 54 million people and 8 billion meals. What are you watching as you try to analyze the trend in figuring out how bad it might get for you?

Babineaux-Fontenot: Yeah, so we’re looking at what happened in previous recessions and financial crises. We’re also looking at current trends, by virtue of a survey that we do of our food banks. For instance, about 40% of the people who are coming to us for help are people [who] never before relied upon the charitable food system. So we use that data. As I said, it’s really challenging right now. And that’s the bad news. The good news is there are things we can do to make things better.

Ryssdal: Yeah, hit me with those because after those bad numbers …

Babineaux-Fontenot: Well, I would ask that there continue to be some of the generosity that we’ve seen throughout this whole pandemic to provide donations of food, funds and volunteer time. But even with all of that, that’s not going to solve the whole challenge either. So we’re asking for people to reach out to members of Congress and right now, let’s urge them to get back to the table and to prioritize the needs of the most vulnerable members of our society. They can make additional investments in federal nutrition programs. We know from past financial crises that for every $1 invested in those federal nutrition programs, their return to the economy is $1 and 70 cents. It’s one of the most stimulative things that they can do. So it’s good for people, and it’s good for the economy at large. I mentioned it a couple of times, I want to just address it very directly, the outpouring of support that we’ve received from industry, from farmers, from the government — there have been some policy interventions that have been very helpful — and from the American public, it is unprecedented. The need is also unprecedented. But we want to thank everyone who’s made investments in our work. 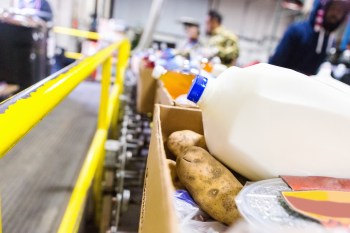