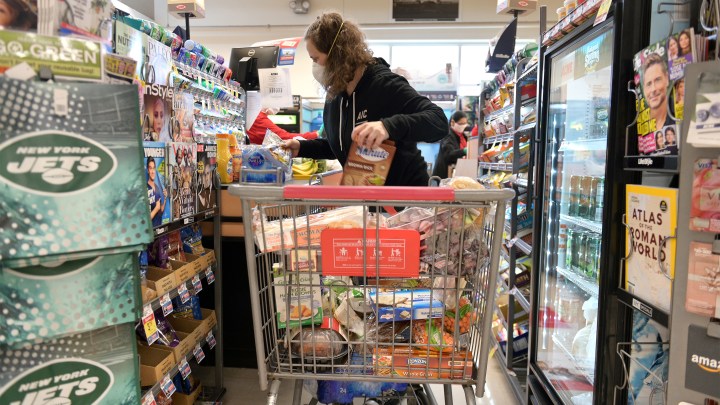 COPY
A woman checks out her purchases at a grocery store in New Jersey. CPI tracks the monthly change in the cost of consumer goods and services. Michael Loccisano/Getty Images

A woman checks out her purchases at a grocery store in New Jersey. CPI tracks the monthly change in the cost of consumer goods and services. Michael Loccisano/Getty Images
Listen Now

We’ll get a look Wednesday at inflation numbers for July. Specifically, the federal Bureau of Labor Statistics will release the consumer price index, or CPI.

There’ll be headlines on whether prices are up or down. But what’s behind that headline number? Where does it come from?

The consumer price index measures how the cost of a sample shopping cart of staples changes over time. There’s lots of stuff in the cart.

“Almost everything you could think of that you buy,” said Steve Cecchetti, an economist at Brandeis University. “Food, apparel.”

He said the Bureau of Labor Statistics, which compiles the CPI each month, collects price data from more than 25,000 businesses. Nationwide insurance Chief Economist David Berson said it is a labor-intensive process.

“Basically they go to stores — whether it’s electronically or in person — and write down prices,” Berson said. “They compare those prices to a month earlier.”

The BLS surveys consumers every few years, asking what they’re buying, and then updates the cart. The BLS also tries to adjust for price spikes, but that can distort the overall picture. It releases something called the core CPI each month, which strips out volatile food and energy prices. Kathy Bostjancic, U.S. chief financial economist at Oxford Economics, said the pandemic has pushed up the cost of things in high demand — like alcohol.

“Alcoholic beverage inflation has increased from less than 1% — it was 0.9 in February, [and] it increased to 2.2% in June,” Bostjancic said.

The CPI can affect your wallet. Your boss may use it to calculate your next raise to keep it above inflation. And Social Security cost-of-living adjustments are tied to the CPI.