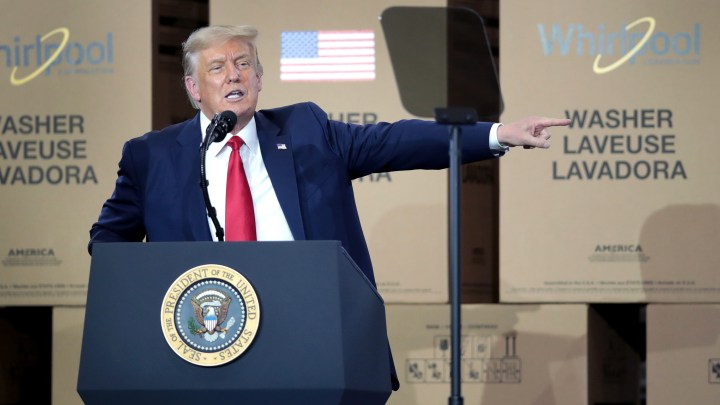 The trade deal between the U.S., Mexico and Canada, the United States-Mexico-Canada Agreement, went into effect last month. But a trade conflict between the U.S. and Canada is flaring up once again nonetheless.

President Donald Trump says he wants to reimpose tariffs on some Canadian aluminum products. The president says Canada is flooding the U.S. with imported aluminum and undercutting American companies. Canada disputes that, and is promising to retaliate with tariffs of its own.

Trump made the announcement Thursday at a Whirlpool plant in the critical swing state of Ohio after touting previous tariffs aimed at boosting American manufacturing.

Among them were steel and Aluminum tariffs on Canada, imposed in 2018 and lifted last year, during trade negotiations over the USMCA, which replaced NAFTA.

But now the president is reimposing tariffs, in nine days, on some Canadian aluminum because he says the country is again flooding the American market with the raw material. A Canadian trade group said any recent increase was due to pandemic-related production issues.

Meanwhile, many American businesses oppose Trump’s move. The U.S. Chamber of Commerce called it a step in the wrong direction. A U.S. aluminum industry trade group said the move undermined the USMCA.