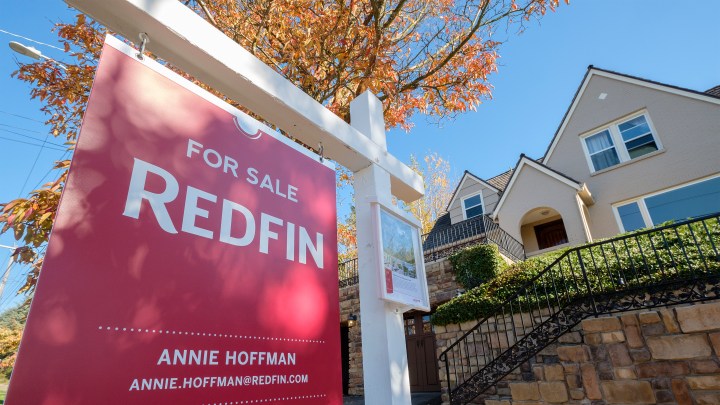 COPY
A house for sale in Seattle. Black homeownership rose slightly in 2019, but mortgage denial rates were still much higher — 16% for Black applicants compared to 7% for white borrowers. Stephen Brashear/Getty Images for Redfin
Race and Economy

A house for sale in Seattle. Black homeownership rose slightly in 2019, but mortgage denial rates were still much higher — 16% for Black applicants compared to 7% for white borrowers. Stephen Brashear/Getty Images for Redfin
Listen Now

Owning a home is one of the main ways people build wealth in this country, so the fact that nearly 75% of white households own their home, compared to 44% of Black households, goes a long way toward explaining the persistent wealth gap.

The Consumer Financial Protection Bureau is out with new data digging into that disparity. While Black Americans made some gains in homeownership last year, they were far more likely to be turned down for a mortgage than other racial and ethnic groups.

That’s an improvement, said Nikitra Bailey with the Center for Responsible Lending, but, she said, “African Americans continue to be underserved in the mortgage finance system in relation to their population overall.”

Though loan denials overall fell, 16% of Black applicants were denied mortgages last year, compared to 7% of white borrowers. The most common reason lenders cited, by far, was the ratio of a borrower’s debt to income.

Research has shown that ratio isn’t the strongest predictor of default.

This week, the Consumer Financial Protection Bureau proposed a rule that could make it easier for borrowers with higher debt-to-income ratios to qualify for loans. The current standard would be replaced by a measure that weighs affordability based on the annual rate of interest.

“What we don’t know is whether with this additional variable, are you actually going to grow the lending pie?” said Karan Kaul, senior research associate at the Urban Institute’s Housing Finance Policy Center. “Are you going to shrink it, or does it stay roughly the same?”

And if the lending pie does grow, who gets a bigger slice?