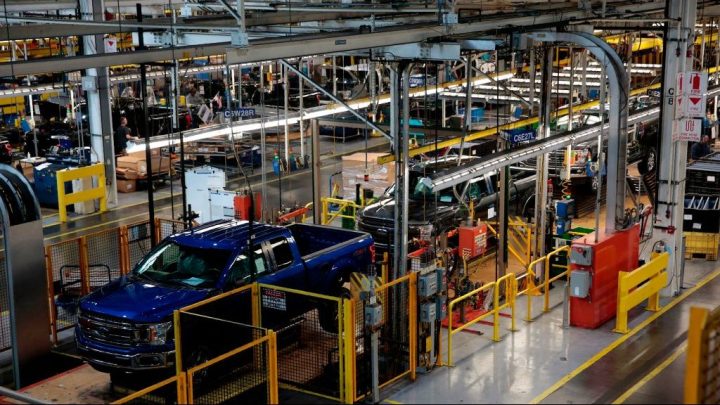 Ford is set to unveil the latest iteration of it's F-150 pickup truck. Jeff Kowalsky/AFP via Getty Images

Ford is set to unveil the latest iteration of it's F-150 pickup truck. Jeff Kowalsky/AFP via Getty Images

On Thursday night Ford will pull the wraps off its new F-150 pickup truck. Launching a crucial new vehicle in the midst of the coronavirus pandemic isn’t likely to have been the automakers first choice, but it has little option.

Ford’s F-Series of pickups (of which the F-150 is the smallest and most popular) has been America’s best selling truck for over four decades. Two F-150s are sold every minute.

“Any time ford launches a new F-150 it’s important, but now, more than ever, it’s critically important,” said Michelle Krebs, analyst at Cox Automotive. Pickups are money making machines for automakers, with much larger profit margins than other vehicles. That cash is crucial this year, so even if it’s not ideal timing, Ford can’t afford not to update the F-150.

This hasn’t been an ordinary year. Figures out Thursday forecast that new vehicle sales will be around 25% lower in June compared to 2019. The market is recovering from a low in April, when much of the country was under stay-at-home orders, and millions of people had already lost their jobs or were worried about their income. Automakers propped up the market with zero-percent financing deals, and offered online car shopping. Analysts now expect around 13 million vehicle sales, total, for this year, down from expectations of over 17 million.

“We are in an unprecedented time, we have never had every car plant across the globe shut down before,” said Krebs. “In the midst of that Ford is launching one of the most important vehicles in the auto industry.”

Ford went into the recession the U.S. has entered facing stronger headwinds than some of its competitors, according to Krebs. Its product line was starting to age, and its competitors, like Dodge, were angling for a slice of its truck sales.

“We could see in some of our data the F-150 was losing some of its edge, especially compared to Ram,” she said.

“Ford had such a big year planned for products, it’s under intense scrutiny,” said Jessica Caldwell, executive director of insights at Edmunds. Other big launches include the new Bronco SUV, and the Mustang Mach-E all-electric SUV, a giant gamble on the future of the automotive world. “The market for this is right now,” said Ford CEO Jim Hackett in an interview with Marketplace in November 2019.

Then, the automaker was itching to take on Tesla and secure a place in consumers minds as they contemplated a shift to EVs. Now, with gas prices pushed low by the coronavirus, and consumers perhaps more cautious about big expenditures, the market has shifted.

One piece of good news for Ford is that truck sales stayed relatively strong during the pandemic, even as consumers slammed the brakes on other vehicle purchases. Pickups sell well in parts of the U.S. that were less affected by lockdowns, so buyers were still able to get to dealerships. They’re also used by small business owners and other workers who simply need a truck, and who were able to take advantage of the incentives like seven years interest free loans that automakers were offering.

Analysts will be watching Thursday night’s unveil to see what improvements Ford has made to the F-150 to keep it competitive. Increasingly interiors of trucks are important selling points. Pickups have morphed from utility vehicles where all that mattered was reliability and endurance, to status-vehicles with leather seats, large screens, and luxurious finishes.

Ford is expected to announce traditional engined and gas-electric hybrid versions of the F-150. An all-electric version is expected in a couple of years, to take on the promised competition from Tesla’s Cybertruck, and pickups from Rivian and Bollinger, two startups focussing on the electric truck and SUV space. It’s not clear yet that there will be demand for an electric pickup, but it’s another area where Ford can’t afford to be left behind.

With the F-150, Ford has to balance keeping traditional truck buyers happy, but also staying on the cutting edge in an increasingly competitive market.

“It’s a very interesting time to be watching Ford,” said Krebs. “I won’t say ‘make or break,’ but they’ve got to get this right.”