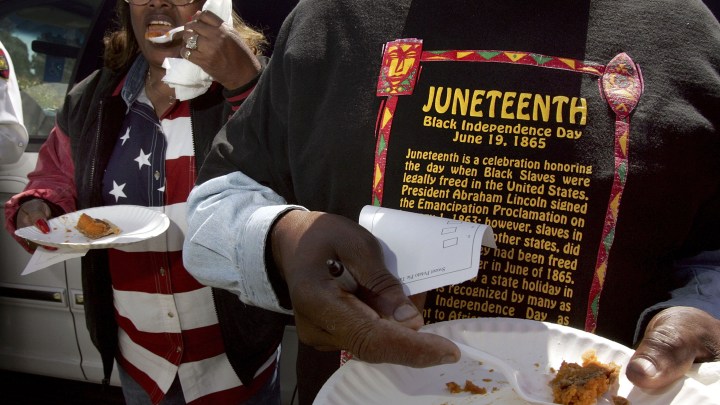 COPY
This is not a new holiday. But with the conversation we’re having now about racial injustice and American history, companies are paying attention to it. David Paul Morris/Getty Images
Race and Economy

This is not a new holiday. But with the conversation we’re having now about racial injustice and American history, companies are paying attention to it. David Paul Morris/Getty Images
Listen Now

It’s Juneteenth, a day celebrating the end of slavery. And this year, given the intense focus on racial injustice, corporations are doing more to mark the holiday.

Juneteenth dates back to 1865 and it is a celebration, specifically, of the end of slavery in Texas, which was one of the last holdouts. Even though slavery had already been abolished two years earlier by the Emancipation Proclamation, people in several states, including Texas, were still being held as slaves.

So this is not a new holiday. It has been a date of significance and celebration to some extent since the late 1800s, particularly during the civil rights movement. But with the conversation we’re having now about racial injustice and American history, companies are paying attention to it.

Some have declared it a paid holiday: Allstate, Nike, JCPenney, Target, Twitter.

Best Buy is making it a paid volunteer day this year and a holiday next year. And General Motors and Ford will participate in a moment of silence today, which was organized by the United Auto Workers union.

More companies offer a paid day off for Juneteenth