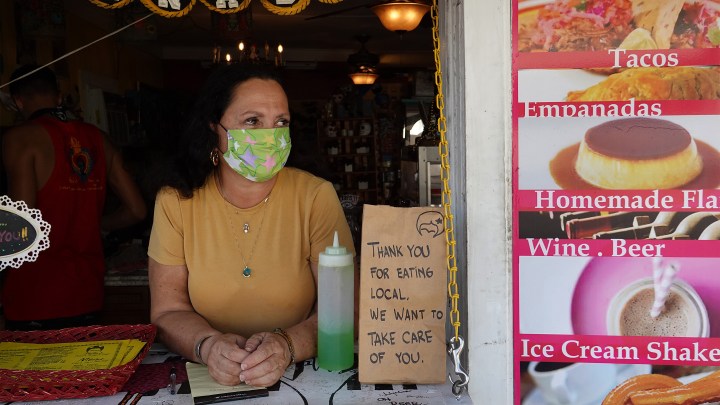 Businesses across the country are in the process of applying for forgiveness for the over $500 billion worth of Paycheck Protection Program loans made so far. This week, the Small Business Administration, in consultation with the Treasury Department, released a streamlined application form meant to cut down on the red tape surrounding the forgiveness process.

The forgiveness process seemed like it’d be pretty involved at first, said Natasha Crosby, who owns a realty company in Virginia. So when the Treasury’s three-page “EZ” form came out this week, Crosby was hopeful.

The SBA said borrowers can use the shorter form if they are self-employed or if their businesses didn’t reduce employees’ wages by more than 25%.

Matt Hetrick of the accounting firm Harmony Group said such businesses are likely to get their loans fully forgiven.

“Anybody who’s using the EZ is saying, hey listen, I spent some money and there’s nothing that I did that will cause a reduction in how much of that money you’re going to forgive,” Hetrick said.

But the EZ application doesn’t address many concerns of small businesses, said Jackie Laundon, who runs a public health consultancy. She isn’t sure whether she can use the form if she spent her loan on health insurance premiums or certain utilities.

“I’m on websites and accounting blogs every other day, trying to figure out what am I exactly going to be eligible for,” she said.

And even to submit any PPP application, borrowers have to go through their banks. Laundon said her lender hasn’t started accepting applications.

“What they have on their website is that they are working internally to process SBA guidance, so that it’ll eventually make it easier for all of their applicants to apply for forgiveness,” Laundon said. She wants to apply as soon as she can, she added, so she doesn’t have to worry about the loan anymore.