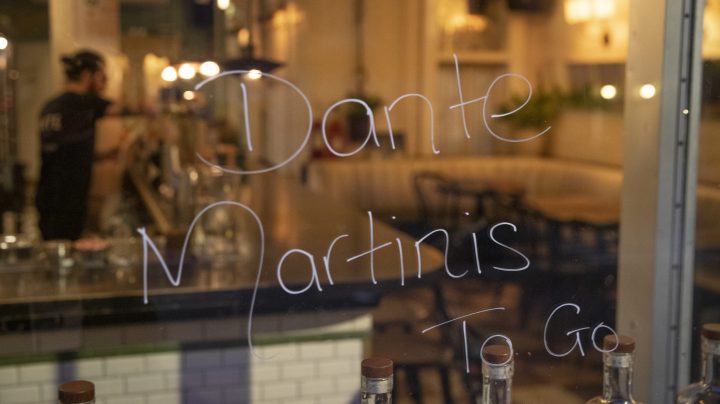 Eight weeks ago today, the Coronavirus Aid, Relief and Economic Security Act became law. We checked back in with some of the small businesses and banks we spoke to on that first day to find out what the law has and hasn’t done for them.

It took a full week after the CARES Act became law for the small business loan provision, called the Paycheck Protection Program, to get up and running. By the end of that day, Ashwin Deshmukh said he was finally making some progress on securing a loan for his New York City cocktail bar.

“I feel like we’ll be able to get at least a loan — if not today, than by the middle of next week,” he’d said. It took over a month.

But by this week, Deshmukh said he’s optimistic. He’s shooting to reopen the bar for carryout service and delivery a week from today. And he’s using the loan money to hire a new chef, work on an all-new cocktail menu and start selling baked goods.

“These are things that we would not focus on if the world was different right now,” Deshmukh said.

Like a lot of business owners who got PPP loans, Deshmukh is struggling with how to meet the requirements to have the loan forgiven. Businesses have to spend 75% of it on payroll within eight weeks.

That’s a problem for Ken Giddon, who co-owns a menswear store in New York.

“Our eight-week period would be eight weeks that we are closed,” Giddon said. “Then it’s basically virtually impossible to fulfill the payroll obligations to get the loan forgiveness.”

And he said having to spend most of the loan money on payroll means he can’t spend it on what he calls his biggest problem — rent.

“Payroll is flexible. Rent is not. And rent can put small businesses out of business,” he said.

Some small businesses aren’t worrying about getting their loan forgiven.

Lorilyn Wilson co-owns an accounting firm in Portland, Oregon. She took out a PPP loan and said she’d rather keep cash on hand and pay off the loan later.

“Because it’s like I don’t want all my employees employed today, I also want them employed three months, six months, nine months, a year from now,” Wilson said.

But there’s a risk that small businesses may not be able to pay back their loans if the virus spikes again later this year, Wilson said.

“Then the fear is ‘OK, can I actually keep my business going, or will I be forced to shut down in six months again?'” she said.

She added that small business owners are worried they’ll get caught up in a cycle of having to rehire people and then lay them off again.